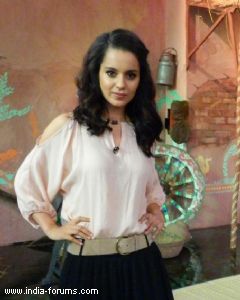 The Comedy Circus Stage has witnessed various eminent celebrities. This time it will witness our very own 'Rajjo', Kangana Ranaut along with her co-star Paras Arora who had come to promote their upcoming film 'Rajjo'.

Kangana and Paras entered supported by Bharti and Krushna's humorous act and played along with them. Kangana then joined the judges Archana Puran Singh and Arbaaz Khan at their table as Paras left the premises owing to prior commitments.

The beautifully elegant actress was in to splits throughout the show and was extremely delighted to be there. She also made her way to the stage danced with Bharti Singh and Krushna Abhishek after their acts. She stole everyone's hearts as she danced on the beats of the song 'Jhulmi re Jhulmi', which is from her upcoming film.

Looking at everyone's reaction, it surely was a 'Jhulmi' Performance.

Shaheer Sheikh opens up on getting offers from Bollywood in ...
14 minutes ago

"This NEWS is FALSE, MALICIOUS & MISCHIEVOUS": Nikhil Slams ...
22 minutes ago