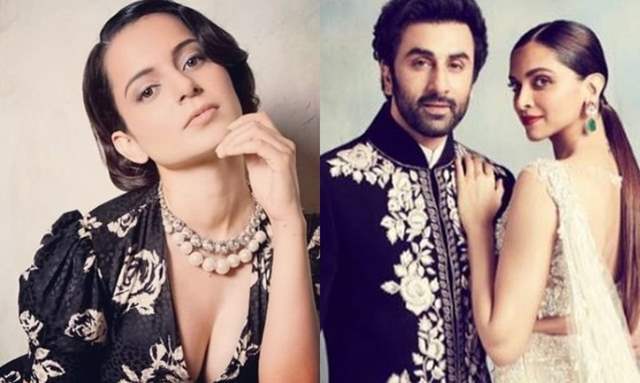 Kangana Ranaut has always been one to be vocal about her thoughts and she often takes to her Twitter handle to express her opinions and thoughts. While the Panga actress is unfearful and never backs out from calling people out, amid the ongoing nepotism debate, she seems to have lashed out at Deepika Padukone and Ranbir Kapoor. The actress feels that 'name-calling' is reserved for only extra ordinary outsiders.

She took to replying to a Twitter user who spoke about how the likes of Kangana and Sushant Singh Rajput were ruled out after just one flop while Ranbir has been given multiple chances. To this, Kangana wrote, "Ranbir Kapoor is a serial skirt chaser but no one dare call him a rapist, Deepika is a self-proclaimed mental illnesses patient but no one calls her a psycho or a witch, this name-calling is reserved only for extraordinary outsiders who come from small towns and humble families."

Meanwhile, Kangana has also lashed out at Ayushmann Khurrana in another tweet and went on to take a dig at him for supporting move mafia. None the less, the actress stands strong by her opinions as far as the nepotism debate is concerned. At a time when things are heightened given how there is an increased conversation about nepotism, these comments have taken over social media.

Funny29 1 months ago the woman is jealous of everything and everyone. she has no friends, nobody invites her to parties and weddings, poor woman.🤣😂🤣 Someone who is friends with this woman has friends and enemies in one person. A woman with 2 personalities 12 hours friend and 12 hours enemy. Is this the new way to promote a film? Oh sorry, is she shooting or is she currently jobless?🤔😏

simplyme 1 months ago I still don't get why people are supporting this lady?!!?!! All she spews is venom against everyone. Is she the only one with freedom of speech? Are people not allowed to have different opinion or preferences? Why do everyone need to feed to her ego? And god forbid, if they don't, she attacks them as if they committed a brutal crime!! You know what, Bollywood is not as toxic as she is!!! She has taken writter's credit, Director's credit, poked her nose in editing and she is portrayed as saint!!! Because of her, I legit feel bad for Karan Johar and that speaks A LOT!!!!! She needs to be held accountable for her actions!! PERIOD!!!

Nakuul Mehta and his powerful narration: Times when he hit ...
23 minutes ago