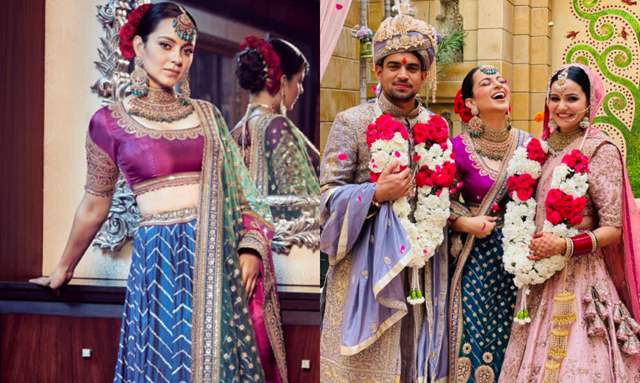 Kangana Ranaut stunned her fans as she posted shared beautiful pictures with her brother Aksht and sister-in-law Ritu’s wedding and welcomed her to the family. The actress left no room for errors in preparations for her brother’s wedding and looking at the pictures it seems to be a totally grand and royal affair.

The wedding was held at a plush hotel in Udaipur which was hosted by the actress.

Kangana who happens to be an avid social media user shared the pictures and she could be seen all decked up in a lehenga at her brother’s wedding. Her ethnic attire was complimented with heavy jewelry and her million-dollar smile.

Meanwhile, on the work front, Kangana Ranaut recently began workshops for her next film ‘Tejas’ with director Sarvesh Mewara and coach Wing Commander Abhijeet Gokhale. The actress will be seen essaying the role of an Air Force officer and is scheduled to go on floors in December.

Apart from that, Kangana recently wrapped the shoot of the Jayalalithaa biopic, titled ‘Thalaivi’. She also has action entertainer ‘Dhaakad’ in her kitty.