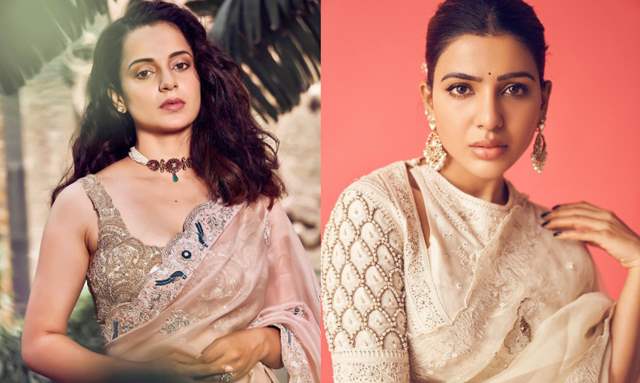 Impressed by the impactful trailer of Thalaivi portraying the life of Jayalalithaa through various stages of her cinematic and political journey, Samantha Akkineni had shared the trailer of Kangana Ranaut starrer and spoke about how she couldn’t wait to watch the magic unfold in cinemas.

While fans are waiting for the release of Kangana’s upcoming film an impressed Samantha launched the first song from the film titled 'Chali Chali' in Hindi, 'Mazhai Mazhai' in Tamil and 'Ilaa Ilaa' in Telugu.

Now, the two are bonding with each other on social media as the Manikarnika actress reacted to the pan-India star sharing the first song of Thalaivi.

Praising the pan-India actress Kangana penned a message for Samantha and called her “the epitome of woman empowerment”. She further pointed out that women need to empower each other and that is real feminism.

“Thank you, my dear @Samanthaprabhu2 for being so gracious... You are the epitome of woman empowerment, we need to empower each other and that’s real feminism. Thank you,” Kangana wrote in a tweet on Friday while appreciating Samantha Akkineni’s efforts.

Impressed by Kangana’s tweet Samantha took to her Twitter handle and hailed Kangana as she wrote, "Queen"

Thalaivi is touted as one of the most anticipated films of the year generating immense excitement to witness the journey of Jayalalithaa's life through the various stages. From her struggles in the film world to the rise of her stardom as well as her battle through the political hurdles and ultimately emerging as the fierce leader who changed the shape of Tamil Nadu politics.

Thalaivi, presented by Vibri Motion pictures, Karma Media Entertainment and Zee Studios in association with Gothic Entertainment and Sprint films have been produced by Vishnu Vardhan Induri and Shailesh R Singh and Co-produced by Hitesh Thakkar and Thirumal Reddy, with music on T-Series. Thalaivi is set to release worldwide in Hindi, Tamil and Telugu by Zee Studios on 23rd April, 2021.