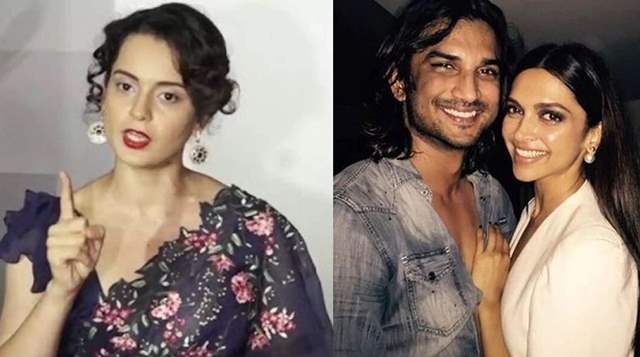 After Sushant Singh Rajput's death, many celebrities have been talking about depression and nepotism in Bollywood. Actress Kangana Ranaut has also went forward and made some shocking revelations about nepotism in Bollywood. Her twitter team had also recently taken a jibe at Deepika Padukone calling her the 'repeat after me' gang.

Now the actress has accused Deepika of conspiring against JNU protest and also boycotting Sushant Singh Rajput. Her team recently tweeted a screenshot of an article of Deepika not inviting both Sushant and Kangana to the wedding. It further states how the actress had hired and called a Pakistani agent and conspired the JNU protest.

"This is a picture and article from Deepika Ranveer wedding, they called Pakistani agent and conspired JNU protest but boycotted only two top stars one is killed other one fighting for her survival #justiceforshushantsinghrajput #Deepika"

LoLo 16 days ago She is not worth any attention at all. She mentions big names so her articles can be viewed! She barks like a wild dog and sadly all the fans who loved Sushant follow every asinine thing she says. She had nothing to do with this young man. Sadly his suicide has lead to more questions than answers and she’s exploiting this whole situation. She’s a sick person.

Needblessings 17 days ago I am urging Deepika Padukone and his legal team to take actions against this terrible, toxic , disgusting lady Kangna and her team. If anything happens to Deepika this lady should be behind the bar.She is trying her best to kill deepika. she is mad.

Rubyreadyhui 17 days ago She is in news 24/7. She is trying to get back at people who she thinks wronged her at some point. She is gaining mileage off SSR's suicide. Let the police do their work ! She just sounds like a lunatic now!!! Yukkkkkkkk :(. They did not call you for a party because of your stupid behavior that everyone can see now!

beingaditij 17 days ago She has gone mad...she is just writing whatever nonsense is coming into her mind. She hardly knew Sushant and now becoming his amma...

Funny29 17 days ago the woman is losing her mind. The woman is just a joke. I can't understand that there are people, who believe and support this woman. This has nothing to do with Sushant. Dee can invite to her wedding if she wants. Top star Sushant:, why isn't there a movie with both of them in it? I've never seen party pictures with either of them.