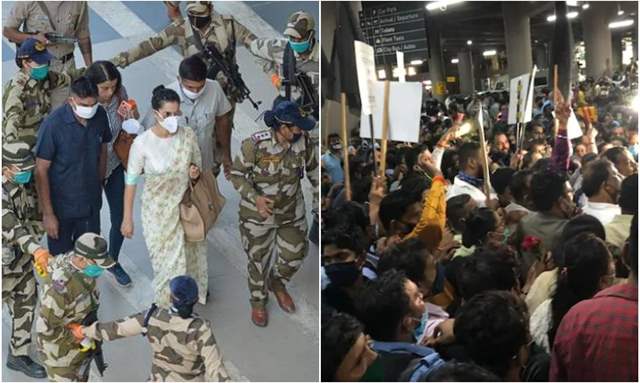 Actress Kangana Ranaut is in the middle of a highly escalating political tiff with the Shiv Sena. Ahead of her arrival in Mumbai from Himachal Pradesh, the BMC carried out demolition for 'illegal construction' at her Mumbai office Manikarnika Films Pvt Ltd.

Following this, Kangana Ranaut's lawyer filed a plea over the matter in the Bombay High Court. The HC has ordered a stay on demolition of her office. Meanwhile, this act by the BMC has led to a massive outrage amongst people and the Rajasthan based Karni Sena have come out in support of Kangana.

In the latest development, Kangana’s flight has landed at Mumbai Airport, where a huge crowd has gathered in protests. Shiv Sena workers with black flags and the Karni Sena and RPI with Manikarnika posters have crowded at Mumbai Airport as Kangana arrives.

Dodging the protests and slogan chanting, Kangana exited the flight in a special vehicle along with her sister Rangoli Chandel and CRPF jawans who are escorting her. As the actress left from the airport through a special gate, heavy security has been deployed at her residence.

Reacting to the demolition drive by BMC, Kangana had taken to her Twitter handle and wrote, “There is no illegal construction in my house, also government has banned any demolitions in Covid till September 30. Bullywood watch now this is what Fascism looks like”.

This comes after the actress was mired in a war of words with Shiv Sena leader Sanjay Raut over her remark comparing Mumbai to Pakistan Occupied Kashmir (PoK).