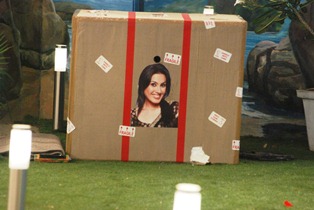 Kamya Punjabi and Sangram Singh have always come across as tough contenders in the Bigg Boss house. These ingenious contestants have always given their sweat and blood to every task that they have undertaken and have proved themselves.

This time around, they have not only given a performance that was paramount but have also proven to be the stalwarts of this season.

As a part of the luxury budget task, the three contenders Andy, Sangram and Kamya were asked to undertake the Bigg Box task where they were to survive inside a box with an aid of a survival kit. The one contestant, who is able to survive inside the box for the maximum time would win the Ticket to Finale' task by securing a position in the grand finale. While Andy is the first one to come out of the box after surviving for approximately 19 hours, Sangram and Kamya still continue to perform the task and survive in the box.

As a result of their strong will and determination, Kamya and Sangram have broken the record of Big Brother UK by surviving in the box for more than 26 hours. Soon after they break the record, Bigg Boss makes an announcement and congratulates Sangram and Kamya on their achievement. While it was a moment of pride for Kamya and Sangram, the housemates also applauded the duo.

Even after achieving a milestone and adding another feather to their cap, Kamya and Sangram continue to survive in the box with the desire to reach the grand finale.

So what record will they set?

danceismyworld 6 years ago Hats off to Kamya Punjabi. She deserves to win the show!!!

-Subah- 6 years ago Kamya again you have PROVEN how strong and BRAVE you are !!
Sangram is a professional wrestler, it ain't a big thing for him. But you being a regular woman, simply excelled it !!
KUDOS to you! (CLAP)

jenny156 6 years ago Kudos to Kamya for showing such a strong will power (Y)
Kamya Punjabi, you're a strong lady !!

Kangana Ranaut tried to mock Deepika, Sara and Shraddha for ...
36 minutes ago