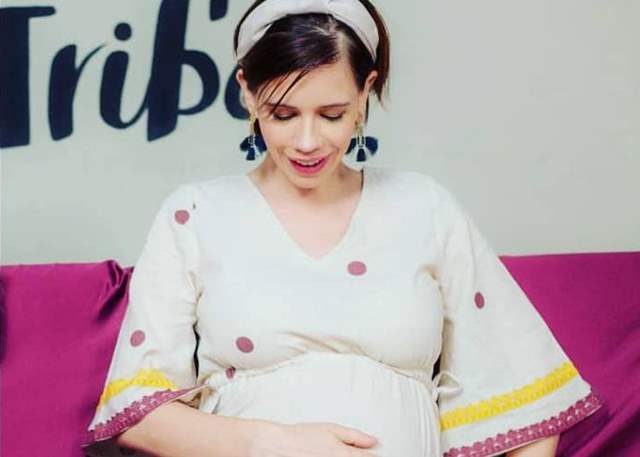 Kalki Koechlin recently surprised everyone when she announced about expecting her first baby with partner Guy Hershberg. The actress also took to her social media account and shared a cute picture with her baby bump and revealed that she is dating a classical pianist Guy Hershberg from Israel.

Post announcing the big news, while speaking to Hindustan Times Brunch, Kalki shared that she is five months pregnant and has even decided a name for her baby. She shared that if it's a girl then she will be naming her and if it's a boy then her partner, Guy will be naming him. However, at this point she does not wish to reveal the names they have selected and want to keep it private till their baby is born.

Now, in her interview with Mumbai Mirror, Kalki has opened up about her pregnancy, the difficulties she faced in her first trimester, her partner Guy Hershberg, their reaction to the pregnancy, marriage and parenting plans.

While talking to Mumbai Mirror, Kalki started off by revealing that in her 20's she wanted to get her tubes tied up as she didn't think that she would ever want a child and then went on to reveal the reason she changed her mind about having one.

"Some women don’t want children, and that’s fine. I myself didn't want children, and that’s fine. I myself didn’t think I wanted them and had even thought of tying my tubes in my 20s. But the combination of seeing my little brother being born and growing up as well as a more settled feeling of creating a home for myself, made me excited about having a child."

Speaking about Guy, the actress shared that she is with someone who makes her feel calm and stable. She also revealed that her pregnancy was so unplanned that she couldn’t believe it at first and called for another pregnancy test.

"I called for another pregnancy test, I just couldn’t believe it. It was so unplanned!"

When asked if Guy Hershberg was around when they found out about her pregnancy, she said, “Oh yes, and he was jumping with joy.” She further added about Guy, “It’s a process of gradual trust. Ironically, the distance helped us communicate a lot more since we don’t have the luxury of seeing each other every day. He has spent his life teaching children piano so, he’s going to be the disciplinarian, the more experienced parent I feel.”

Kalki also shared that she first broke the news to her family, her make-up artist, a few close friends and her manager and they were all overjoyed and overwhelmed and she exclaimed that, "It seems like everyone was waiting for me to have a baby."

While sharing about her pregnancy, Kalki mentioned that the first three months were terrible, however, the second trimester is fun. She adds, “God, the first three months were terrible! I have developed so much respect for all the mothers out there who work or have to go through all this without emotional support. The second trimester is fun. I have energy to work-out and I am cheerful at work. The kicks are amazing. Feels like there’s a little footballer in there!”

Further when she was quizzed about her cordial relation with Anurag Kashyap post their divorce and that since he too is a father of a daughter, so if he had given her any parenting tips. To this, Kalki revealed that Anurag welcomed her to the parent's club soon after he learnt about her pregnancy. "He’s just welcomed me to the parents’ club and told me to call if I need anything. Seeing Aaliyah (Anurag's daughter) growing up and my own brother Oriel too, I have already got a glimpse into this lifetime."

Kalki will be having a water birth in Goa so for that she is meeting her mid-wife regularly and getting the right exercises because she feels preparing herself for the birth is very important. "The water birth is said to be a great way both for mother and child to experience less trauma," concluded the mom-to-be.

We wish Kalki all the very best for the new phase of her life.

Disha Salian's Dance Video With Rashami, Gurmeet & Others 2 ...
10 minutes ago

Meet the On-screen Mother of Sana Sayyad in Star Plus' ...
52 minutes ago

Rhea's Lawyer Dismisses Her Being 'Missing' Allegations; ...
an hour ago