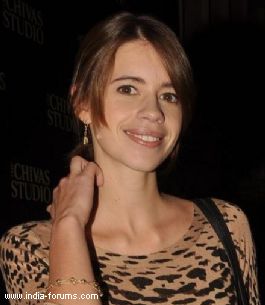 Actress Kalki Koechlin, who has been part of Bollywood for the past four years, wants to do a Tamil film because she can speak the language, but rues that nobody has approached her so far.

"I would love to do a Tamil film. I can speak Tamil. I would like to do regional films, which I am comfortable talking. I am quite open to do Tamil films, but sadly nobody has approached me to do a Tamil film," Kalki, the Indian actress of French descent, told IANS.

Seen in films like "Dev D", "Shaitan", "Shanghai" and "Zindagi Na Milegi Dobara", the actress says if she had not made it big as an actress, she may have needed a psychiatrist.

"Right from the young age, I was only interested in acting. If not acting, then I would have needed a psychiatrist," she said.

Kalki will be seen next in "Ek Thi Daayan". In Kannan Iyer directed film, the 29-year-old has teamed up with Emraan Hashmi, Konkona Sen Sharma, Huma Qureshi among others. The film is slated for an April 18 release.