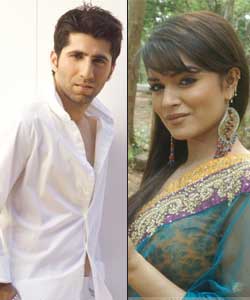 The mighty partners in crime, Kalavathi (Aashka Goradia) and Sudarshan (Sumit Kaul) will be back with a bang very soon in Colors' Laagi Tujhse Lagan.

While Sudarshan's character has been on and off, Kala was given a sudden exit as Aashka had to leave for the shoot of Khatron Ke Khiladi Torchaar.

But we hear that both of them will be back with a bang, and to face the music this time will be the new Dutta (Shabir Ahluwalia).

If sources are to be believed, Sudarshan will be at a gambling place when the people working there would want him to meet their boss. It is expected that Kala will have some kind of association with the gambling place. This meeting of theirs will unite Kala and Sudarshan, and the mighty force will be in action again to plan and plot new ideas against Dutta and his family.

It is also believed that Kala will appear with a new look this time around.

When contacted, Aashka Goradia told us, "Yes, I am starting shoot from day after. Kala and Sudarshan's comeback will bring some interesting moments in Laagi".

Sumit Kaul too accepted the news of return and stated, "As of now, all I know is that Kala and Sudarshan will be back to plot new plans".

Let's now see what this mighty duo will be up to...

9 years ago crap, crap ,crap.WHY new dutta while they can see there will NEVER be any replacement for Dutta Sriram Patil. This show is already messed up and now even it will get worser. Not watching it anyway so good luck cretive team.

+ 2
9 years ago AS THIS SHOW IS VERY SLOW AND BORING AND ESPECIALLY AFTER DATTA HAS LEFT I NOW WATCH ONLY GEET SERIAL ON STARONE AS LOVE MAAN N GEET!

If Dutta/ mishal is not there who will you scheme against... the walls ..

9 years ago Kala and Sudarshan are fine, the only problem is the new Dutta, just cannot accept that!! So not watching the show!!

+ 4
9 years ago Shabbir can never replace the charm of Mishal ..

+ 5
9 years ago Let see how the new Dutta create his place and win back what he have lost...