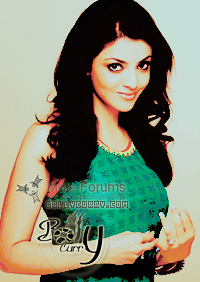 side role in Kyun... Ho Gaya Na! in 2004. Not finding a follow up break for herself in Mumbai, she moved down south back then, to star in movies like Teja's Lakshmi Kalyanam (another flop), Chandamama (a blockbuster), Magadheera (her biggest Telgu blockbuster for which she even bagged the Filmfare Best Actress Nomination) Darling, Brindavanam and Mr.Perfect... among others, finally establishing herself as an icon to identify with. In Tamil, she has seen her break with movies like Bommalattam, Modhi Vilayadu and  Naan Mohaan Alla;  in Kannada cinema she debuted with Raju Hasan's Thathastu opposite Chirag.

And after filing her kitty with those range of works in cinema, she has finally found her opening to return to original station Bollywood.