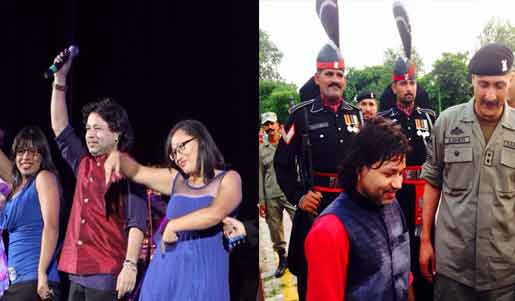 There is something extraordinary about Kailash Kher and his melodies. His popularity not only touches mountainous heights in the country, but in fact exceeds itself elsewhere in the world, so much that wherever he performs, every listener becomes a fan, an admirer. Only recently, when he performed at Wagah Border, Punjab, besides his fans from this side of the border, but even a few Pakistani officials not only put forward their wish to meet him but also clicked pictures with him.

Currently, Kher and his band Kailasa are on a tour in the U.S. So far, he has sung at the Niagara Falls in Canada's Toronto. He also made the India Day Parade all the more harmonious in Manhattan, and also put San Francisco in a trance. All his performances have left just one effect on his listeners, and that is dancing and moving along to his music.

He sang his evergreen numbers Allah Ke Bande, Teri Deewani, Main Toh Tere Pyaar Deewana Ho Gaya, alongside other such beautiful songs and filled all the Indians there with a deep sense of nostalgia and love.

“No actor could have replaced Pratik Gandhi in Scam 1992”, says Hemant ...

“Rama Shetty from Mum Bhai will be a character close to my heart for ...