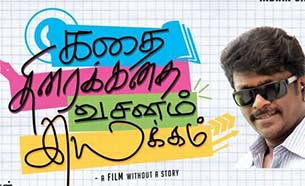 Upcoming Tamil comedy "Kadhai Thiraikkadhai Vasanam Iyakkam", which has a quirky tagline "a film without story", has created a strong buzz among audiences and its director R. Parthiepan is elated with the response.

The film featuring an all new cast was launched Nov 7. Shooting is expected to start in a few days.

"My intention was to intrigue the audience with the tagline. People have started to talk about it. They are asking, how can there be a film without story? The purpose of such a tagline was to create that curiosity in public and I have achieved that," Parthiepan told IANS.

"My film will be a satire on the filmmaking process with interesting screenplay. I have tried to build a narrative based on certain events. For instance, when we look at a film like 'Life of Pi', its screenplay is based on whether the tiger will eat the boy or it won't. Whatever you see in the film is the extension of one of those events," he added.

Parthiepan, who has previously helmed as well as starred in films such as "Housefull", "Ivan" and "Sugamana Sumaigal", decided not to act in his latest film.

"I know acting is my strength but having worked with different filmmakers in their films, I have donned varied roles, but in my own film 'Housefull', I played a 70-year old man and that role was not accepted by audiences.

"Even my mother couldn't accept me in that role," he said.

"When I act in my own films, audiences have a certain expectation from me. Since I have already announced that the film doesn't have a story, I thought it would make sense if I don't act in it," said Parthiepan, who is also producing "Kadhai Thiraikkadhai Vasanam Iyakkam".