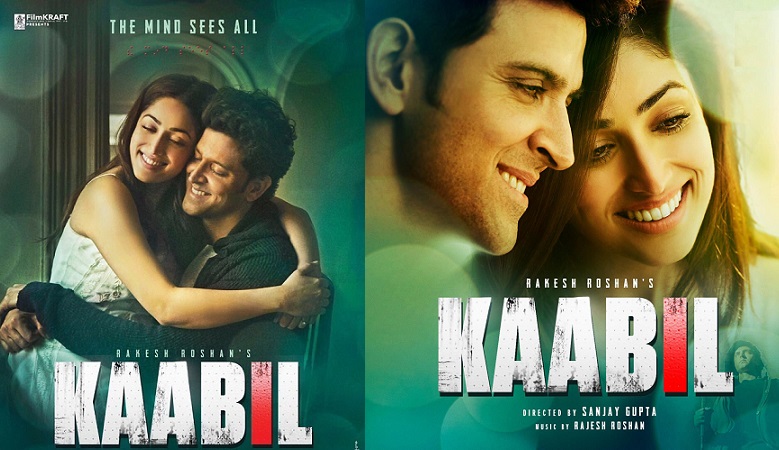 Look! Just see that man's face. Rohit loves his wife Suparna to death. Her death, as it happens to be. A moment so shocking in the film and filmed with such gruesome pathos, that I found my hands going up to my mouth in sheer horror.

Nooo! This can't happen to such lovely people going through such a dream-like journey of togetherness, rudely interrupted by a kind of life-stopping tragedy that sucks the very breath out of romantic yearnings. "Kaabil" tells a very simple two-storeyed story.

In the first opulently romantic overture, Rohit is set up for a date with Suparna. They meet in a string of beautifully beaded encounters -- Rahul and Suparna Get Lost In A Mall, Rahul and Suparna Take To The Dance Floor, etc. Then they fall in love, and get married.

This is all familiar mush territory shot by cinematographer Sudeep Chatterjee in a filtered haze of delirious romanticism. There is just one difference. Both Rohit and Suparna are blind. Well, technically, that is. For all practical purposes, they can see far better than many people around them.

A lot of the film's warmly conversational dialogues take good natured digs at people who can "see" but can't really comprehend the immense power of humanity to heal. Instead, they choose to hurt one another, sometimes just for fun.

The hideous doings of Amit Shellar (Rohit Roy) and his friend Wasim (Shaidur Rehman) break the idyllic beauty of the couple's paradise with a shattering impact. It's an ugly turning point in the plot, and one that signals the turn-around in mood from tender soft supple colours to a splash of angry blood red orange glow hues.

Hrithik's transformation from romance to rage is so credible, compelling and chilling you flow with his fury to the battered, bruised, bloodied, wounded love-soldier wondering if hell hath any fury like a blind man scorned.

So far, I thought the most convincing blind act I had seen was Naseeruddin Shah in "Sparsh". Now I am not so sure. Hrithik plays blind with a blinding brilliance. Intelligently enough, his unseeing character stumbles and panics when thrown into strange circumstances and places rather than act cool heroically super confident.

To understand this star-actor's mastery over his character's dithering destiny, we just have to see how he dances with his Significant Other in an elaborately staged ballroom sequence. Here Hrithik dances how a blind man would dance if he could dance like Hrithik Roshan.

The vendetta, when it bursts forth in a raging torrent, is again defined wholly by the protagonist's character's physical abilities. Action director Sham Kaushal conceives elaborately staged stunts where Hrithik fights using his extra sharp audio perceptions to compensate for his character's visual impairment.

It's an astonishingly skilled performance. Sharp and penetrating, conveying an elaborately charted map of the human heart and yet never obvious in its intentions. This is his best since Sanjay Leela Bhansali's "Guzaarish".

Yami Gautam as the love of his life is capable and likeable and seems to love the attention she gets from the camera and her co-star. But after Hrithik, it is Ronit Roy as an unscrupulous contractor-politician who stuns with his ability to say much without speaking it all. Watch him in the sequence where he visits Hrithik to condole. His casual reference to crime and sexual violation will shock you. Ronit's Marathi accent is bang-on.

There are some other very accomplished actors around, notably Narendra Jha as a conscientious policeman and Girish Kulkarni as his corrupt colleague. But if I've to single out one other hero in this saga of fumbling fortitude besides Hrithik, it would have to be sound designer Resul Pookutty. No other Indian film in recent times has made such telling use of sound. Voices and whispers blend into the sanguinary fabric to create an aura of ominous retribution and redemption.

As a director, Sanjay Gupta has seldom been more willing to let his characters appear vulnerable and undefended though not defenceless. Gupta creates a romance splendid and tender, only to quash it with a brutal spin that takes us kicking and screaming to a finale that never ceases to amaze us without losing its plausibility.

"Kaabil" is a film about love and its abrupt send-off. It is a violent film. But the emphasis is on the damage done to the soul of the wronged man. It must be seen for Hrithik Roshan's incredibly moving performance and for the unexpected glimpse it provides into its director's romantic personality.

5 years ago It is very nice movie and story of movie is very beautiful.