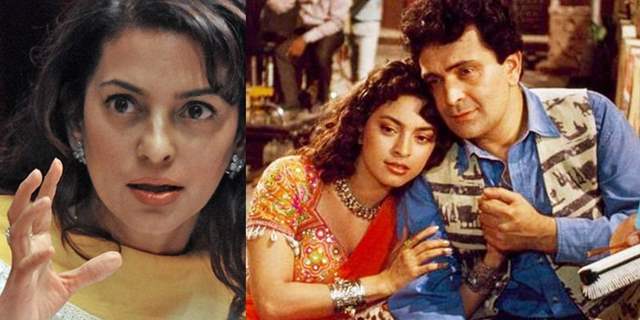 "Shocked!! Saddened beyond words! Devastated Can't believe it ... Not Chintuji ! I feel really really sad . I have many many memories of him ...I started working with him soon after QSQT in Kalpataruji's film Ghar Ghar Ki Kahani, Ghar Ki Izzat was another of our films. At that time, being a newcomer I would be overawed by his presence on the sets, as he was such a big star ; he was always such an effor-tless actor he barely rehearsed and the director was always happy with his very first take of a shot ! I'd be trembling and praying I didn't forget my dialogues in front of him and look foolish . He was always friendly, but a little detached . Everyday he'd work 2 shifts mostly, moving from studio to studio and always punctual. He had his own timing and he kept to that, I can't remember seeing any temper tantrum, he was super efficient with work and effortless.

My fondest memory of my early days working with him was , so usually actresses take longer getting dressed so I would reach the shoot location early and by 10 am be absolutely ready . That's the time Chintuji was to arrive , he would come , most often sit in the outdoors under a tree and get his make up done; Shashi dada, his make- up man would have set out a neat table with all the make up material and a tiny transistor radio that would be turned on while make up was done. Since I would be ready or doing my solo shots, sometimes I would go sit nearby and watch Shashi dada would carefully do Chintuji's make up , do the contouring of the features , the radio would play songs & after some time ... Shashi Dada would say alright done, impatiently Chintuji would pick up the sponge & rub it all over his face ..!! The pink of the cheeks got rubbed off along with the brown of the chiseling and everything would be mixed up on his face   HI Chintuji would ruffle or comb his hair and say alright .... I'm ready ! I would laugh and laugh cause Chintuji had just undone all Dadas efforts !! And Chintuji did this every time !" 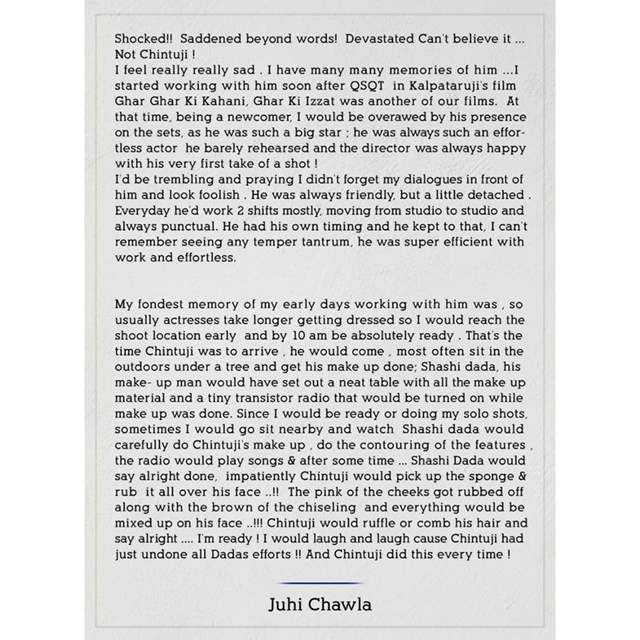 Chintuji also had the biggest tallest mirror ever! Before every shot Dada would hold up the mirror for Chintuji to check himself and Chintuji would jokingly say , I'm not just checking myself but I'm also checking the background , making sure everything is alright! And as time went by , we did some more films, Bol Radha Bol , Eena Meena Deeka , Saajan Ka Ghar and some others . Now Chintuji would bring along a Scrabble board .By now I was a little more confident and perky myself : I'd take on the challenge. Eveytime there was a break in shooting , the Scrabble board would come out and Championships were on! I played really well but he was too good , 9 out of 10 times he beat me but I was not one to give up . I'd keep trying hard to win ! It was such joy .

Chintuji would get annoyed with fans who came to watch shooting with tiny children and who would push their bawling children in front of us and say, 'Hamare bacche ko aapke saath photo leni hai I Chintuji would say to us ... how do people do this , their children are frightened, have no clue who we are and their parents instead of saying , please may we have a picture with you , torment their children: He came up with a trick ... when some such person would come and begin to say ... Sir , please may I Chintuji with a straight face begin to speak formidable high sounding but meaningless english sentences : The Constitution of the American Confederacy will take punitive action against the lordship of the Universal intell-igence inducing mankind's venerable position withholding classified information in toto .!!! and then with a straight face conclude ..'Did you understand..?!? ' The hapless fan by now would be completely confused , gobsmacked , stammer and run for his life ...! As usual I was somewhere around , holding my sides with laughter . 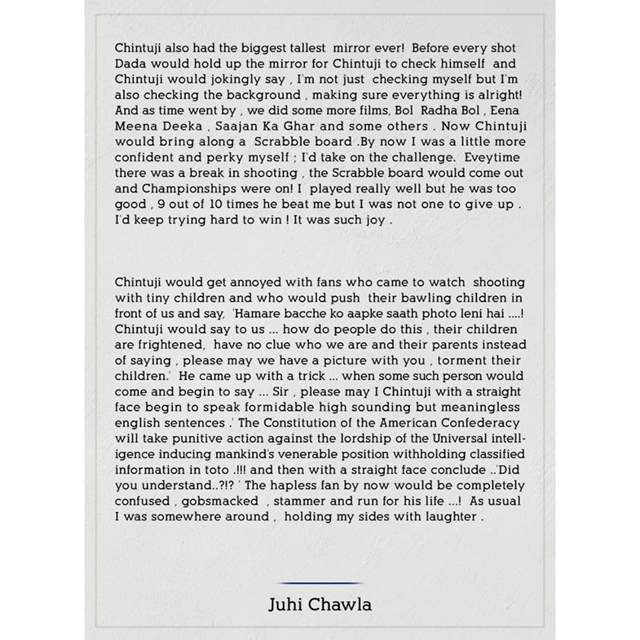 We worked in director Zoya Akhtar's debut film. We played a prosperous Punjabi couple , a typical hindi film producer and his flashy wife. Chintuji had such a funny role and he played it with such aplomb. On the sets , when our shoots were getting stretched into the nights , my crew would begin to grumble to me ,I would tell them , Don't worry Chintuji will never stay too long: He always leaves the sets by 10 pm and then we will be let off as well . ( Like i mentioned earlier Chintuji had always had his timings set and he kept by them ) . But here in Luck By Chance , the clock would strike 11 , then way past midnight , then 2 am we would be tired , and grumpy. Chintuji would continue shooting happily, enjoying himself , not one temper tantrum, surp-rising us all. Chintuji also had the funniest way of scolding all of us on the sets ... I think that meant he was fond of us ! Whether he was asking you fondly how you are today ... or ticking you off for goofing up in a scene, it all sounded the same ! It was hilarious , after a point ,whenever he was sounding short tempered I would start laughing ..!!!

I think he did this with the people he was comfortable with . which still meant all of us! In September 2017 , a most charming script about a middle aged gentleman called Sharmaji , was narrated to me . I liked it immensely, It was amusing , heartwarming ,touching . I was so happy Chintuji was going to play the lead This time too , I envied him . what a wonderful role! It was tailor made for him , I felt I could almost see and hear him do the scenes. We were to begin shooting in November . The producer Honey Trehan and director Hitesh wanted to hold a joint narration with the entire cast and crew. Since the script was complete with dialogues , it seemed a good ice breaker . Chintuji was reluctant . He finally agreed to come for it .1 remember it was in Sun and Sand Hotel , the entire cast turned up . Chintuji arrived , sat at the head of the table , and announced .. I've been acting for many many years now ... never done a reading before in my life ... I only agreed to this because Amitji (Amitabh Bacchan I does these kinds of things . Anyway , my lines will be read by the director , and I will be leaving halfway as I have other work to attend to .. so please excuse me . The reading began , and as the scenes were read , it became so much fun ,there was spontaneous laughter , it was almost like the film came alive..... Hot only did Chintuji stay on... he enjoyed it so much , he was the last person to leave the venue that evening ..!!! 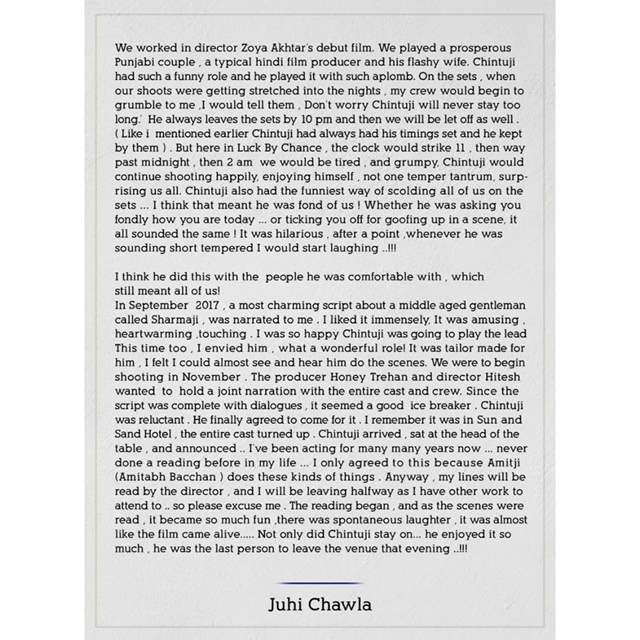 Due to Chintujis treatment , the shooting was postponed. The film was finally taken over by Ritesh Sidhwani and Farhan Akhtar for production . In January this year I joined the crew in Delhi for the shooting . It was wonderful . The weather was beautiful, our shooting was on track. Chintuji was his amusing , happy , some-times grumpy , often chatty self . Just sometimes he would sit by himself in the sun , or looking into his phone preoccupied. We had a great time shooting , he was effortless , absolutely effortless in his shots . Always and I mean always after his shot , the director would shout a very satisfied spontaneous OKKKKK into the mike . I remember watching Chintuji during the shots on the monitor and almost enviously thinking to myself ... Chintuji is so nice ,just SO nice on screen .... it is not fair! After my shots Hitesh, the director sometimes said a doubtful .. yes ... fine ... ok ...good 11

After most shots I would ask direction to replay my shots so I could see my look and performance , Chintuji would chide me saying ... You are such an insecure actor! What is this bad habit all you have, of going and looking at the monitor . The monitor is only for the director ... its not meant for the actor ! Why do you allow all this Hitesh ! ?? And more often than not we all got a scolding , for some trivial thing or another .. and I'm telling you Chintuji's scolding was always hilarious... I would be rolling with laughter while the director , Hitesh ,would try to reason with Chintuji . . So often I looked at our cinematographer and crew ,signaling, I hope som-eone is rolling the camera in between shots , the behind -the-scenes -goings- on are so funny we can make a movie from that footage itself   111 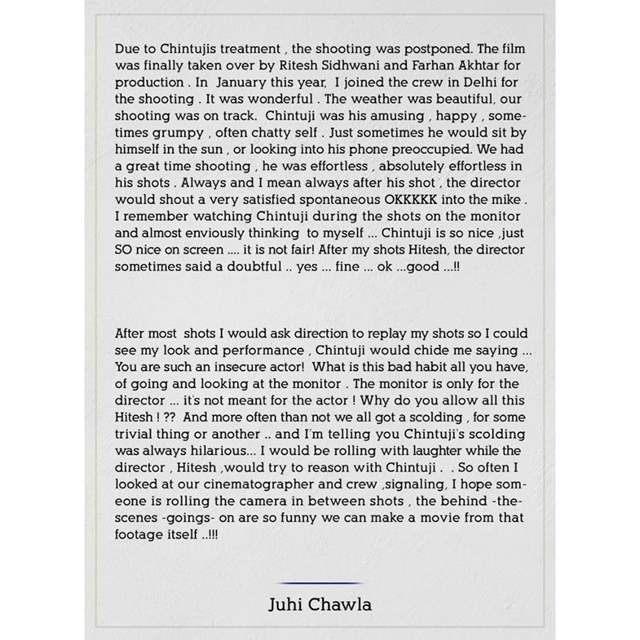 The last time I met Chintuji was at the HK hospital , he had gone for some routine treatment ,early March , Neetuji was with him. K S Sanjay ( my friend and former secretary of 20 years ) and myself ... we were chatting with them for almost 3 hours . At the end I said to K S before Chintuji throws us out , let us exit grace-fully ! After the lockdown , maybe a fortnight ago , I received a meme , a picture of Chintuji saying , finally after so many years , Chintuji gets an answer to his question , Baahar se koi andar Na as sake , Andar se koi baahar na jaa sake , socho kabhii aisa ho to kya ho .. socho kabhii aisa ho to kya ho . I thought it quite funny and forwarded it to him! 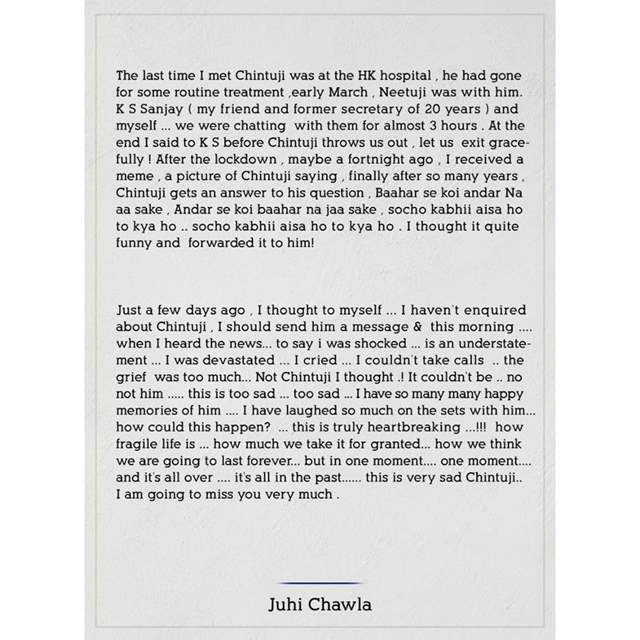