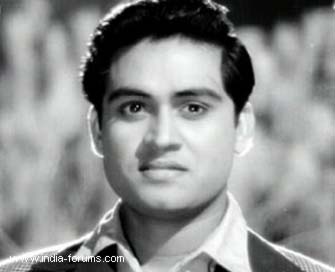 Joy Mukherjee, often referred to as Bengali candy, breathed his last here Friday. Thousands of fans will always remember this chocolaty charmer of the 1960s as Dev of "Love In Simla" - his debut film - who made women swoon.

He became a heartthrob thanks to his matinee idol good looks. He wore Western clothes like a fashion model and won a huge number of female fans, who remember him for his boyish looks and physique.

Often criticised as a bit wooden and one dimensional as a performer, he showed great comic timing. With his debut in "Love In Simla", in which Joy romanced Sadhana, he became a king of love stories.

In films like "Phir Wohi Dil Laya Hoon" (1963) and "Shagird" (1967), he wooed the most popular Bollywood actresses of the era - Asha Parekh and Saira Banu - respectively.

Born into an influential film family, Joy was the son of Sati Devi and Sashadhar Mukherjee who ran the famous Filmalaya Studios. Sashadhar is often credited for discovering both Sadhana and Asha Parekh.

Joy had two brothers - Deb and Shomu. The latter was married to actress Tanuja and they had two daughters, Kajol and Tanisha. Rani Mukherjee is his cousin's daughter.

As his debut "Love in Simla" catapulted him to stardom, it later came to fore that he wasn't even the first choice for the role. Many newcomers, including Dharmendra, were considered for the project. But director R. K. Nayyar noticed Joy and convinced him to sign for the film. Joy was barely 21 then.

Nayyar worked wonders as he paired Joy with newcomer Sadhana and the wide-eyed Azra. If Sadhana's Audrey Hepburn fringe became the talk of the town and a style statement, Joy's chocolate boy looks were equally appreciated.

From 1963, Joy teamed up with Sadhana's rival, Asha Parekh, to collaborate on a hat-trick of musical hits - first he was signed by Nasir Hussain to act opposite Asha in "Phir Wohi Dil Laya Hoon" (1963).

A year later came Pramod Chakravarthy's "Ziddi", again with Asha. And in 1966, the duo hit bull's eye with "Love In Tokyo". At the height of the craze for shooting abroad, Joy declared his love for a kimono-clad Asha fluttering an embroidered fan and false eyelashes in the film that was shot in Japan.

Contrary to the Joy-Asha successful pair, Joy's films with Saira Banu didn't quite hit it off. Of the five films they did together - "Shagird", "Door Ki Awaaz", "Aao Pyar Kare", "Saaz Aur Awaaz" and "Yeh Zindagi Kitni Haseen Hain" - only "Shagird" did well at the box office.

Joy ruled the roost till the advent of the Rajesh Khanna craze, which caused audiences to lose interest in him as a romantic hero. It was then that Joy turned producer and director.

He produced and directed "Humsaaya" (1968), where he gave himself a double role.

Film historians remember the movie as it included risky stunts and a series of blasts that blew up trucks, but what people remember the most is the cat fight between Mala Sinha and Sharmila Tagore on the sets, which gave the film unexpected publicity.

But his magic waned after that.

In the early 1970s, Joy worked in a series of films, including "Ehsaan", "Anjana", "Puraskar", "Aag aur Daag", "Kahin Aar Kahin Paar", but failed to charm the audiences.

Joy tried to revive his career with the 1972 movie "Ek Baar Muskura Do", which was a moderate success. In this family film, Joy co-starred with brother Deb Mukherjee and to-be sister-in-law Tanuja.

Ironically, films with big heroines, "Love in Bombay" (1974) with Waheeda, which he also directed, "Saanjh Ki Bela" with Nutan (1981) and "Umeed" with Nanda (1989) trickled in, but Joy had then passed the prime of his life and so had his leading ladies.

Joy's death at the age of 73 Friday would mark an occasion for his legion of fans, now grown up, to reminisce the charms of the Bengali babu whose looks left a lasting impression.

(Mauli Buch can be contacted at mauli.b@ians.in)