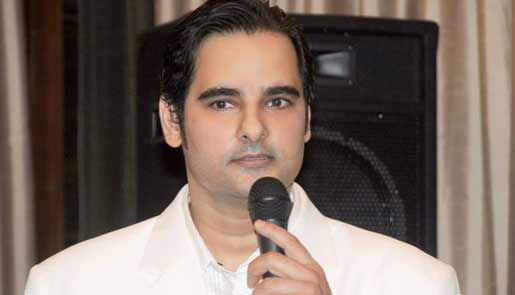 Monjoy Joy Mukherjee has unveiled the first look of his directorial debut "Hai Apna Dil Toh Awara", which marks the relaunch of his late father and actor Joy Mukerji's banner.

The movie is produced under Monjoy Joy Mukerji Productions and Monjoy, who has also penned the movie, is excited about it.

"The film has a very young vibe and I'm confident that a lot of people will be able to relate to it. My father has always been my inspiration and I feel that comes across in the film, especially in the music. I feel honoured to relaunch his banner," Monjoy said in a statement.

The first look of the movie, launched in association with Deepakk R. Gupta and Neha D. Gupta of Anikaa Films, was unveiled by Monjoy's mother Neelam, and uncle Ram at a hotel here Thursday evening.

"Hai Apna Dil..." is a slice-of-life story of three young couples -- all friends -- living in the chaotic and stressful city of Mumbai. The film revolves around the couples and how they deal with married life and try to pick up the pieces in order to find a harmonious balance.

"My husband's films ('Love In Tokyo' and 'Shagird') were known to reflect the times in which they were made, and just like his father's movies, I'm certain that Monjoy's film too will be a mirror to the society and the life the young generation leads today."

Ajay Singha and Subash Pradhan have composed music for the film.

Speaking on behalf of Anikaa Films, Neha D. Gupta said that they wanted to make a film for a while and even looked at numerous scripts.

"But after meeting Monjoy and reading 'Hai Apna Dil Toh Awara' script, we knew that this was the movie we wanted to be a part of," she added.

Sahil Anand on testing positive for COVID-19: I didn't come out about ...