Filmmaker Shirish Kunder is excited to know that his much- anticipated movie "Joker" has featured in New York Times' August movie release schedule. 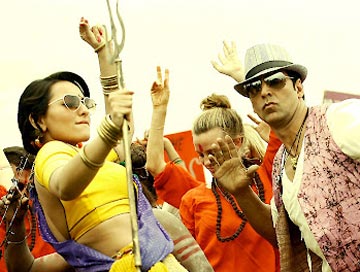 "'Joker' features in The New York Times movies list. The only Indian film that finds a place in it," tweeted the 38-year-old.

Starring Akshay Kumar and Sonakshi Sinha in lead roles, the film is set to release Aug 31.

Abhimanyu Singh, who launched into showbiz by Anurag Kashyap in "Gulaal", is playing 33 different roles in television show "Upanishad Ganga", which airs on DD.

Kashyap and Abhimanyu met at the Mumbai airport. The former was there to catch a flight to Patna, where he will promote his upcoming film "Gangs of Wasseypur".

When the filmmaker asked him about the serial, Abhimanyu said: "It's an amazing serial and to play 33 roles for a 52 episode serial was like an icing on the cake. And it has been a pleasure working under the guidance of Chandraprakash Dwivedi."

After a gap of almost two decades, Dwivedi has returned to the small screen with "Upanishad Ganga". His last stint on TV was in the successful and popular serial "Chanakya", which used to air in early 1990s.