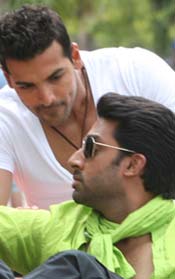 The Dostana sequel is the talk around town these days as everyone is very eager while waiting for the motion picture to hurry up and hit theatres.


In recent times, the Dostana squad, John Abraham and Tarun Mansukhani where present in the US for the New York Film Festival. At the festival Tarun got the chance to interview John for the US news channel, AVS. Their section on the show was called Tea with Tarun.


During the interview, John stated he was missing his co-star, Abhishek Bachchan who was in shooting for Mani Ratnam's Raavan in India. But, he then added some humour by stating that Tarun, being as hairy as Abhishek, filled in his shoes perfectly.


Now, who knew that this would be one of the attention-grabbing Bollywood friendships?
Featured Video