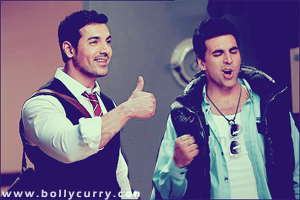 on the sets of their forthcoming film, Desi Boyz, while shooting in London.

And the common factor between these two hotties you ask? Why their obsession with body sculpting of course!

According to sources, John and Akki, who are famously known for their fitness regimes, are often seen sweating it out in the gym together, exchanging the best of tips between their mutually existing expertise over the matter! So much, that Akki now graces John with the moniker, "big butch John", as was recently found from one of recent tweets on the ever reliable Twitter.

Not like its their first time, as one might remember their previous joint onscreen venture of some years ago - Garam Masala - and yet, the fraternity feelings between the two are a new high this time round.

In a place as iffy as B-Town, where you go from being friends one day to not on talking terms the next, it's refreshing to a burgeoning bond - whatever the excuse!