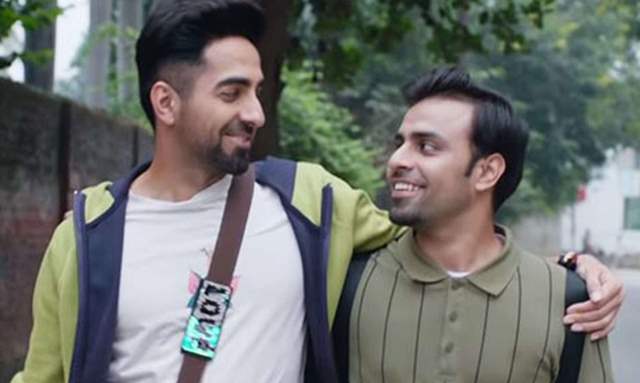 Ayushmann Khurrana is known for commercially enriched cinemas and now he has once again made it to the headlines for his upcoming film, Shubh Mangal Zyada Saavdhan. He will be seen sharing screen space with Kota Factory star Jitendra Kumar who has grabbed equal attention. While the film focuses on Gay relationships, the two were also seen performing a romantic scene which featured a kiss between them.

However, Jitendra has now reacted to his kissing scene with Ayushmann.

Ask him how the kiss turned out to be and Jitendra is quick to answer, “It was not very different from kissing a girl. Daadhi thodi chubhti hai (laughs), but yeah, it is the same.”

While several have acknowledged the fact that Onscreen intimacy between actors of the opposite sex is definitely hard to perform, actors tend to be nervous and skeptical about doing same-sex kissing scenes. However, this was not the case with Jitendra.

Talking about the kissing scene Jeetu said, “As soon as I heard that the film was about a gay love story, it was obvious [to me] that there would be romance. The concept of two guys falling in love and their feelings towards each other was important to be portrayed. So, I was not very hesitant regarding the script and the kissing scene. But the anticipation of the scene and the question of my comfort doing it, for sure, were on my mind. However, Ayushmann and the entire crew created a very comfortable space for me.”

On the work front Jitendra has been focusing on character at hand and he is simultaneously looking out for promising scripts in Bollywood and web.

PDA Alert: Ayushmann Khurrana and Tahira Kashyap 'Kiss' amid a game of ...

Ayushmann Khurrana is now open for ‘Consultation’; Announces his next ...

"It’s been a decade since I last spent New Year with family": ...