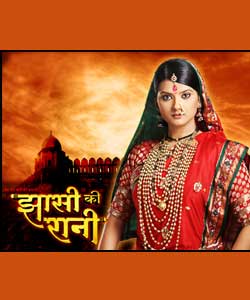 There have been many action sequences that we have seen in Zee TV's historical show Ek Veer Stree ki Kahaani Jhansi Ki Rani, but the sequence which will be aired soon is something to watch.

The show is now airing the major sequence of the show which is the last big fight and in that, there will be a high point where Rani Laxmibai (Kratika Sengar) will jump from a 20 feet wall. It will be seen that the Mahal has been attacked by the Firangi, and Rani Laxmibhai in order to escape from their clutches jumps over a  wall which is 20 feet high.

We contacted Kratika Sengar who told us "Yes there is a major sequence where I will jump from 20 Feet to save Jhansi from Firangi. I have done many action scenes in my whole journey on the show, and it's been a fantastic experience. Now I am used to doing such action scenes, we do such scenes with full protection and it was amazing to shoot it".

harshitaroxx 7 years ago love u kratika di...
u rocked as Rani laxmi bai n now rocking as Arti in Punarvivah...Luv u n keep rocking as alwaz...

Neha10 9 years ago kratika di is the real queen...

juhidivyanka14 9 years ago Plz inform the episode where Kratika has jumped from 20 ft high wall is already shown or it will be telecated.

RapChick101 9 years ago Kratika Sengar, one of the most finest actresses of tellywood! Luv u

fuzzyface 9 years ago may the spirit of the late Laxmi Bai protect her. Jai Ho

Deepika Padukone Arrives at NCB, to be Questioned over ...
36 minutes ago