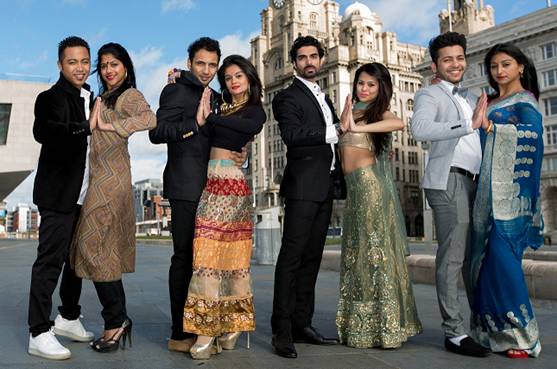 As 725 TV buyers from around the world descend on Liverpool to attend BBC Worldwide Showcase, the cast from one of BBC's most popular global phenomenon's, Dancing With The Stars, brought an extra sparkle to the city known for its love of glamour.

The cast are visiting Liverpool to take part in a special performance for international television buyers attending BBC Worldwide Showcase. A wide range of BBC Worldwide content will be available for buyers to view throughout the next three days in 600 digital booths where the best of British programming is presented to the world. As the largest distributor of TV programming outside of the US, BBC Worldwide Showcase sees the BBC's commercial arm generate programme sales on behalf of the BBC and independent producers providing a major boost to British television exports.

The appearance of the Jhalak Dikhhla Jaa dancers will be the first time the programme format has come back to the UK, where it originally began with Strictly Come Dancing.  Since 2004, the Dancing With The Stars (as it is known internationally) format has been licensed by BBC Worldwide in many territories around the world, including the USA, Germany, Vietnam, China, South Africa and India.

The sixth and latest season of which translates in Hindi to 'Show me a glimpse' aired in September 2013 on Colors (Viacom) and was produced by BBC Worldwide India. This latest series achieved its best audience figures to date with the grand finale doubling the previous season ratings. There are also two regional language versions of the format in India.

Hathras case: Kangana Ranaut says 'Have immense faith In UP ...
40 minutes ago