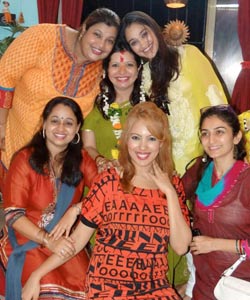 Jennifer Mistry Bansiwal, who had been playing Mrs Roshan Sodhi in Taarak Mehta Ka Ooltah Chashmah, held the Godh Bharaai ceremony in her house specially for her Gokuldham society friends.  Jenniffer, who is seven months pregnant with her first child, says, "I did this Godh Baharai only for gokuldham society ladies. Actually I am a Parasi but I am married to Hindu, so I asked to Taarak Mehta's  ladies about baby shower . They all came to my house and they all did my Godh bharai. It was a very nice moment for me. When I was in Taarak they were my constant companions but since I have left the show, its been a forced distance.  Inspite of busy shoot schedule, when they agreed to come I was very happy. So they not only came over at my place but Munmun did my hair style and Disha Wakani all the time took care  of me. She also taught  me to sit and to walk . When I saw Ambika, I almost cried.

"On the sets of Taarak Mehta we did lot of funny things together. We had thought about dancing and singing but when we met there was so much to catch up on that we ended up talking and eating only.  This August, I am expecting my baby. Even my producer Asit Modi and his wife Neela ji called and asked me about my health." Says Jennifer Mistry Bansiwal.

7 years ago i wish she returns to the show after delivering a healthy baby..

7 years ago Woah for a second, i thought this article is about Jennifer Singh Grover..!!

7 years ago so sweet...Happy GodhBharai Jenny...and so sweet to see the entire Gokuldham ladies for the function...taking the onscreen bonding offscreen too...just love TMKOC...by the way whats this see through outfit Anjali is wearing...wow...

+ 3
7 years ago Really missing Mrs. Roshan and Roshan!!!
But best of luck to her for her future!!!
And great!!!
They are still in contact and are good friends!!