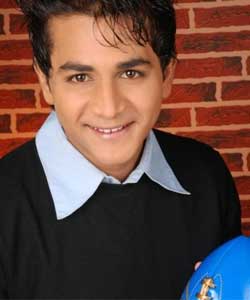 Not many know that Jay Soni, popularly known  as Ishaan of Star Plus' Sasural Genda Phool, has a younger brother who is an aspiring actor. It's now been heard that Nirav Soni will play an important character in Sunshine Production's next on Colors, Na Bole Tum Na Maine Kuch Kaha.

We contacted Nirav who confirms,"Yes I will be playing the character of Tanu Vyas, Rinku Karmarkar's son. A very spoilt brat, highly influenced by gadgets and bike.He loves to show off. The character has different shades to play. Sometimes you will feel that I'm very irresponsible but in the next situation I may come across as a mature person. I love playing the character."

On asked whether he had taken any tips from Jay he confirms," Yes I always took tips from Jay. He is very supportive. When I was offered the show I consulted him. He insisted that I should take it up because it was indeed an interesting character."

Nirav Soni has been acting since the last 5 years. To his name, he has shows like Disney's Dhoom Machao Dhoom and Jersy No.10, after which he took a break to complete his graduation.

MrRockySingh 8 years ago looking forward to NBTNMKK, didnt knew he was bro of Ishaan

PreetyLoveJS 8 years ago I just saw some of his ad's.he is good:)

shivani003 8 years ago He does look similar to Jay. All the best to him. Iam liking the promos of this show.

Alpha_Ka_Gamma 8 years ago wow seems intersting...but when will IF open the shows forum...its just three days left pls start the forum for NBTNMKK

Budtameez 8 years ago NIRAV LOOKS LIKE JAY, WHEN SASURAL GENDA PHOOL TAKES A LEAP, NIRAV CAN PLAY ISHAN AND SUHANA'S SON..LOL
#
All the very best of India to Nirav Soni.!!

Delnaaz Irani speaks about entering Choti Sarrdarrni, her ...
37 minutes ago

Madhrima Tulli & Ssharad Malhotra starrer “Pasta” gets an ...
56 minutes ago