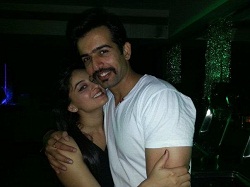 Jay Bhanushali who had a clean shaven chocolate boy look has now grown a moustache which gives him a rowdy Rathore look. We were speculating whether he has grown a moustache for a new role. We called up his dear wife Mahhi Vij who told us that he hadn't grown it for a role but because this kind of facial hair suits him. Obviously Mahhi loves her husband's moustache. We tried contacting Jay for a byte but we were unavailable to reach him.

9 years ago hahahaha even if he grows a brain, he will always be Johnny Bravo :P