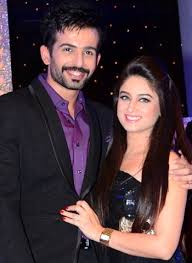 K9 production's show Comedy Nights with Kapil on Colors has gained tremendous popularity and has been attracting lots of people from the industry to make an appearance in this show.

Most of the actors from Television as well as from the Film industry have made their presence felt on this show. Now one more TV actors' name has been added in the list of TV guests who is Jay Bhanushali. The actor will appear on the show along with his wife Mahhi Vij.

When contacted Jay he said, "It was a great experience working with such a talented team. We were overwhelmed after meeting Kapil Sharma, Sumona Chakravarti and rest of the members. Comedy Nights with Kapil is one of my favorite shows and I am really obliged to the production people who thought and invited us to be a part of this great show. We had an amazing experience and we had lots of fun while shooting. Basically we will be coming as Jay and Mahhi as we are playing as our own character in the show."

Elaborating more on the act in the show Jay said, "The act will commence with Kapil who has opened a guest house and we come as the customers. As usual with his funny gags and punches Kapil is trying to convince us. We have completed the shooting last night and we both are really happy to be a part of this great show."

We are really looking forward to see this couple on Comedy Nights with Kapil.