View Profile
In an industry which churns out movies by the hundreds, it hardly comes as a surprise when two popular actors end up 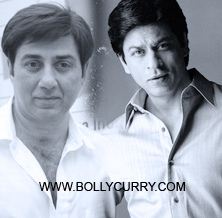 competing for the same day. It's a little more interesting, however, when the clash is deliberate!

With the much anticipated Don 2 sequel pencilled in for a Christmas Eve release; Sunny Deol has made the (brave? foolish?) decision to release his upcoming flick, I Love New Year on the same day.

This rivalry (yes, Shahrukh seems to have no dearth of frenemies) apparently dates back to a decade and a half ago when both stars featured in Yash Chopra's, Darr. For the uninitiated it was originally Sunny who was picked for the lead role whilst Shahrukh was to play the classical villain, but the latter impressed Yash Chopra so much that he unarguably stole the show, carting away the sympathies whilst Sunny's role felt more like a cameo.

The relationship between the two actors has never been more than cold since then and with Sunny bolstered by the success of his earlier flick,  Yamla Pagla Deewana (second biggest hit of the year so far), he isn't willing to step down.

With so much competition, maybe Abhishek Bachchan would fare better by moving his Players to release on a later date.