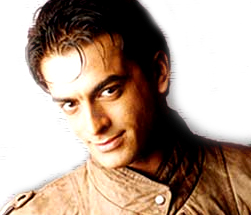 The man who walked through the ramps and made it into the hearts of his fans, the man with a very cute face and a mesmerising smile, Jas Arora climbed up the ladder of fame with his music videos of Gur Naal Ishk Mitha and Mere Long Gawacha for which he is remembered even today! A Dev Anand discovery, Jas got the honour of playing the lead role in Dev Saab's film followed by the Pooja Bhatt film Dushman opposite Kajol. Jas Arora who was busy with a Sitcom in Singapore for the last three years is now back in action to play Anubhav Mehra in Smriti Irani's Thodi Si Zameen Thoda Sa Aasmaan!

This is Anubhav Mehra for you all - A ruthless businessman for whom time is money.. He is a man of principles and substance, a disciplinarian, who runs a military like regime in the house with his two lovely, yet spoilt kids and siblings... He makes sure that even a pin does not fall in his house without his notice.. But beneath this tough and heartless exterior lies a very soft hearted man wronged by destiny.. Anubhav has a secret from his past that he has guarded with his life… And to protect insecurities arising out of that secret, he adopts this tough demeanor. But it is his meeting with Uma Apte (Smriti) that suddenly makes the tough façade shatter. What is the connection between the two? The answer is Anubhav’s journey which will be coupled with Uma’s new journey…

This is it about the mystery-packed character of Anubhav Mehra... Now let us get to know more from the man himself..

We heard you were in Singapore for 3 years..

Jas: Yes, I have been doing a sitcom in Singapore for the last three years, a comedy about an Indian boy married to a Chinese girl. The show is also being aired in Malaysia and New York. Last year, i was called for Prithviraj Chauhan for a cameo, which i did and went back. Recenlty, I was called for this show, i liked the whole concept and decided to take it.

What made you opt for this particular show?

Jas: It was the concept, of how close to life this show is. The story is very touching and I love how real the characters are.

Tell us about your role in the show..

Jas: I wont really reveal much as of now. But yes, I do play an important role in Uma's life. Uma's life is headed for a new direction and I am part of it.

You have been on and off the small and big screen, on a regular basis. Your comments?

Jas: I have done television shows in the past, have done music videos and movies such as Chalte Chalte. I have done a few other good roles too in movies. So i am satisfied..

Do you plan to do a lead in movies?

Jas: I am happy with whatever comes my way. Its not that, if I don't get lead roles, I wont work at all.

Are you done with the Singapore sitcom?

Jas: No, its still on air, I will be traveling back and forth to Singapore.


The lanky smart lad Jas Arora dancing away with the great Bollywood actress Kajol in the number "Awaaz Do Humko" is fresh in our minds even today.. This is the charisma that Jas Arora generates,with his screen presence! We wish all the very best to the Dashing Model turned Actor, Jas Arora...

15 years ago now the question is should I watch it or not????
hmmm still thinking ;)

+ 2
15 years ago awwiiee jas is back yipppeeee i luved him in prithviraj...i luv him frm gur naal ishq mitha days lol now fr his sake i'll even havta watch thodi se..... lolzzz sigh things we have to do to get some eye candy

+ 2
15 years ago thanx.hope he really changes the life of uma,enough of crying n tensions

15 years ago awwwwww.......he looked so cute as raja someshwar in the serial prithviraj chauhan!