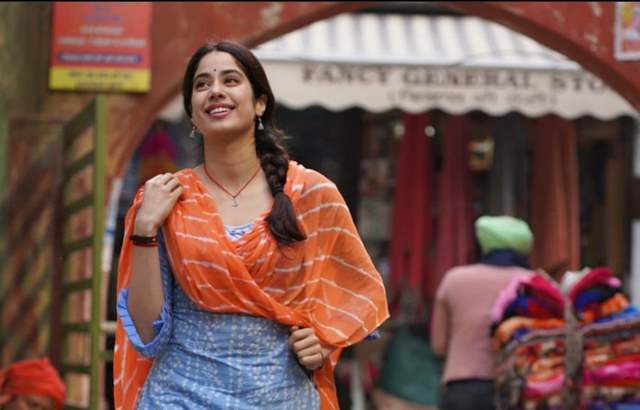 While there is indeed a lot of chaos in the world right now surrounding many issues - one that has been going on for a long time now - is farmer's protests. And a recently stride of these protests actually went on to affect actor Janhvi Kapoor's shoot in Patiala where she has been shooting for her upcoming film, Good Luck Jerry.

According to latest reports, the protestors went on to shout slogans like ‘Janhvi wapas jao’. It was only recently that the makers of Good Luck Jerry released the first look of the film.

ETimes reported that the shoot of the film Good Luck Jerry was brought to a halt by protesting farmers on Saturday evening. As per the report, the protestors gathered on the sets of the film during the shoot on Bhupindra Road. Due to this, the cast and crew had to wrap up the shoot as soon as possible. The report stated that the agitated protestors shouted slogans and also held flags. While the protestors shouted slogans with Janhvi’s name, the actress returned to the hotel.

The report said that the tension created by the protestors led to the cast and crew wrapping up the shoot, and getting back to the hotels. According to the report, apart from the film’s set, the protestors also were to stage a dharna outside the hotel Janhvi Kapoor and other crew members were living at.

Meanwhile, neither the actress nor any other member of the crew has opened up about the incident. As per the report, the police officials were informed about the situation, who arrived at the location. However, no complaint was filed. Amidst the rising tension, there’s no confirmation whether the team will continue the shooting schedule.

Janhvi Kapoor doubles the trouble; Uncovers her sizzling avatar in ...

Janhvi Kapoor drives Rickshaw with crew members as passengers; they ...

Janhvi Kapoor gives a glimpse of her struggle to get into her dress: ...