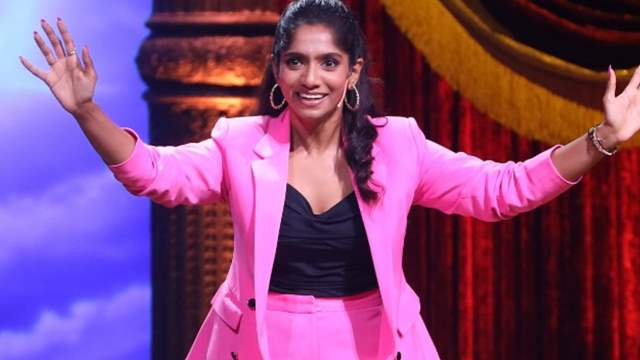 LJamie Lever, the popular comedian will be seen as the ‘Comedy Ki Sarpanch’ this Saturday for the ‘Ticket to Quarter Final’ episode on Sony Entertainment Television's much-adored comedy reality show 'India's Laughter Champion.' Jamie, who made quite the mark on the Indian comedy scene as an emerging comic and mimicry artist will be taking on the responsibility of judging the contestants on their humour parameters along with judges Archana Puran Singh and Shekhar Suman. Not only this, she will also be seen performing a stand-up to an uproarious reaction from the audience who will be applauding her mimicry of different Bollywood celebrities like Farah Khan, Ananya Pandey, Asha Bhonsle, and Kangana Ranaut. Here she talks about her stint on 'India's Laughter Champion' and how the show adds to the comedy circuit of India through its brilliant display of comedians from across India.

1) You will be seen in the recent episode of 'India's Laughter Champion'. Tell us a little bit about your experience on the show

I am very excited to announce that I will be appearing on India’s Laughter Champion this Saturday. I’ve been invited as a ‘Sarpanch,’ where my core responsibility is to see a variety of comedians come and perform their best acts! Everyone who has participated is a true champion in their way, carrying their technique and style. I was truly inspired by the entire experience of watching the comics perform and it was a laugh riot.

2) Looking at the contestants, what is your opinion of the current comedy scene in India?

I feel it’s much more evolved, relatable and observational. Some comics added a desi style to their acts, speaking in the Hindi language some added a touch of poetry. There was a comic from Pune who had a modern approach, observing how general people behave. The current comedy scene is not as slapstick and over the top as it used to be, it's much more real and current.

3) How do you think shows like 'India's Laughter Champion' add to the pop-culture?

Because the current comedy scene is more relatable and observational, it connects with young audiences. I can see any of these performances going viral on social media as it's peppy and fast. I think all the comedians who appeared on the show did a fantastic job of bringing a modern style into their comedy. So it is very well worth adding to pop culture.

4) How would you describe the Indian sensibility towards comedy after having watched a few of the best comics perform on the show?

Social media being so prevalent is the reason why the audience is a bit more open-minded right now. People are becoming more vocal as they are putting ahead their opinions out there. India as a nation is very sensitive but social media has given people the power to express themselves freely. The best comics have performed on the show and the audience would enjoy it as they have come up with fresh and strong opinions about things.

5) What was it like meeting with the judges, Archana Puran Singh and Shekhar Suman?

It’s always lovely to meet the ‘OG’ judges. Archana ma'am was the first-ever judge I faced on television and performed for, which is why I have a very special and strong connection with her. She’s seen me as a contestant and today that she sees me as a Sarpanch, she knows what my growth has been like. She’s very encouraging and lovely. Talking about Shekhar Sir, he’s very well-spoken. He’s very well aware of everything from his jokes to general knowledge. I had a great time with both of them. They’re both masters in their art and know-how to enjoy the comedy. How can someone not enjoy being on stage when they both are present.

6) Having specialised in mimicry, do you see fellow mimics like contestant Jay Vijay Sachaan as your healthy competition?

I don’t think there’s any competition. We are all comics and all we want to do is lift each other. My heart gets so full watching Jay Vijay perform as he’s a true talent, with great voice work and wonderful technique. Honestly, I feel amazed that we have comics like that and the industry should take advantage of their talent by providing them with opportunities. Mimicry is such a beautiful art form and not everybody can do it, so whoever does it, is truly blessed. I feel like I’ve come so far mimicking various celebrities and it’s a very rare art form. For other mimics, I want to encourage them to do better and keep updating themselves. We need to stay united as one comic community and do what we do best. I will always support my fellow comics for the great work they’re doing. It’s almost like social work.