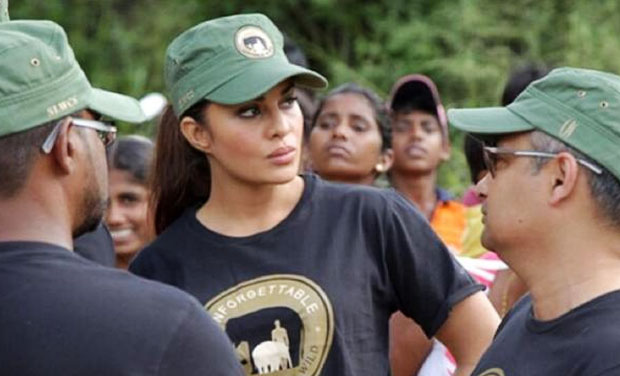 Actress Jacqueline Fernandez is known to be an Animal lover. The actress is extremely sensitive towards animals, and is often seen being vocal of her thoughts on various topics pertaining to them.
The actress took to Twitter to express her gratitude to Sudhir Mungantiwar, from the Forest ministry and Peta India for having taken measures to ensure the well meaning of the wild animal.
Gajraj is a 63 years old elephant who was held in chains for tourist attraction at a temple in Satara, India, was rescued by officials.
The animal was held in captivity for 50 years is dying in agony and has had its tusks chopped off.
The captivity resulted in painful abscesses on his hind quarters and elbows with mental distress caused by social isolation and continuous abuse in captivity.
On hearing about the plight of the old elephant, Jacqueline Fernandez was deeply moved. The news of Gajraj came as a sigh of relief for the actress, who took to Twitter to express her happiness.
Jacqueline tweeted:

The actress is known to possess immense love for wild life and nature. She is often known to create awareness of problems faced by animals in addition to partaking in activities for the welfare of the beings.
Jacqueline has more recently taken up the cause against animal testing for cosmetic products and also plans to take 'Forever Against Animal Testing' (FAAT) campaign to the United Nations.
The gorgeous actress will be next seen in a slew of entertaining films such as A Gentleman - Sundar, Susheel, Risky alongside Sidharth Malhotra, Judwaa 2 with Varun Dhawan and Drive opposite Sushant Singh Rajput.
0 Likes