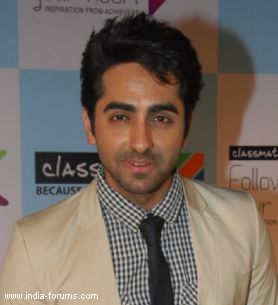 Ayushmann Khurrana plays a scientist in Vibhu Puri's "Hawaaizaada", a near-illiterate in "Dum Laga Ke Haisha " and also doing Shoojit Sircar's football film. The actor, who chooses his projects carefully, is not unnerved by failures or swayed by success.

A: Yes, that's the one I am shooting right now. It's a very difficult film to make. Though I play a real-life character, there isn't much material to fall back on. I am back to this very difficult film after completing Yash Raj Film's "Dum Lagake Haisha". That's done.

Q: That was very quick?

Q: What other preparations to play simple?

A: I was on a vegetarian diet. And I was doing yoga, 'surya namaskar', etc just like the character. In the film, I get married to an overweight woman who loves me. But I don't love her back. She is educated and intelligent. I am not.

Q: And you also play a Kumar Sanu fan in "Dum Lagake Haisha"?

A: Yes, that's an idea we introduced into the film since the film is set in the 1990s when Kumar Sanu was a major force in the music charts. My character owns an audio-video shop. It's all very 1990s. So a huge nostalgia trip for all of us who were growing up back then. I was in school during the 1990s. I remember I used to sing the songs of "Phir Teri Kahani Yaad Aayee" for my first girlfriend.

Q: When your wife reads this she'll have a lot to say?

A: Arrey nahin nahin, she is aware of all this.

A: Yes that will probably start in January 2015. I also have a three-film deal with Yash Raj. So I have one more film with them to do.

Q: You are being picky?

A: Every actor has to be picky. When I decided to do "Dum Lagake Haisha", my producer Aditya Chopra was very surprised. He never expected me to pick a role of a simpleton. Every actor wants to be projected as a star. But I loved my role. I love the character.Adi is very proud of me.

Q: How close are you to Aditya Chopra?

A: I always like to be at the periphery. I can never be the insider. Having said that I must say my first mentor is Shoojit Sircar and Yash Raj has adopted me. It's every actor's wishlist to be part of Yash Raj. I've grown up watching their films. So now I am very proud to have done two diametrically opposed film for Yash Raj, first "Bewakoofiyaan" now "Dum Lagake Haisha".

Q: Were you disappointed by the box office performance of "Bewakoofiyaan"?

A: You know, I don't react that much to either extreme happiness or disappointment. I remain detached from both the conditions. I am quite used to rejections in life. I auditioned for so many films and I was ultimately rejected for. I've become numb to both success and failure. I got good reviews for "Bewakoofiyaan". That was enough for me. I think failure is as important as success.

Q: What plans as a singer?

A: Lots of plans. I am singing two songs in "Hawaaizaada". I have done a version of Ghalib's Dil-e-nadaan in the film. You've heard many versions of the famous lines. This would be the most hummable version. I am making sure it'd be the most popular version of the lines. I am not singing in "Dum Lagake Haisha". Kumar Sanu is. I think that's awesome.

Q: Music continues to be an abiding passion?

A: That's what sets me apart from the other actors from my generation.