Actor-producer Saif Ali Khan says it isn't easy to please Sriram Raghavan, but he is glad the director is happy with their final product "Agent Vinod". 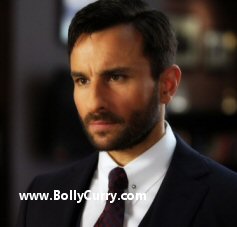 "I think we have made an entertaining film. Sriram (Raghavan) is sitting there and reading the 'Agent Vinod' comic magazine. I just asked him how are you feeling and he said he is very happy.

"It is tough to make him happy and if he is happy then it's great," said Saif, who had earlier worked with Raghavan in the 2004 film "Ek Hasina Thi."

Saif plays a secret agent who averts a major attack in New Delhi in "Agent Vinod". He says he is proud of the way the capital has been captured in the film.

"A roller-coaster ride starts where 'Agent Vinod' travels from Moscow to Riga, then Morocco, Pakistan, and then India, London and Cape Town. So he takes an adventurous ride and then finally avoids a big nuclear catastrophe in New Delhi. I am very happy with the way we have shot in Delhi," the 41-year-old said here in an interview.

"We have shot in big national capitals, but the way we shot Delhi, we all would be very proud of it. It is a splendid city with political happenings," he added.