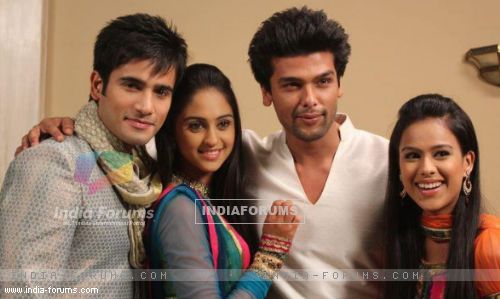 Phoolon Ka Taaron Ka, Sabka Kehena Hai Ek Hazaaron Mein, Meri Behna Hain!
Yes! This was the motto of this fantastically enthralling soap opera Ek Hazaaron Mein Meri Behna Hain. Cinevistaas Limited have a lot many good shows in its kitty, but when it comes to EHMMBH, it is just one another spectacular show the production house has ever made. Be it the beauty of the cast or the chemistry that bloomed between Viren (Karan Tacker) and Jeevika (Krystle Dsouza) and Maanvi (Nia Sharma) and Virat (Kushal Tandon). It has made the viewers cry with its emotional 'Jeeman' (Jeevika and Maanvi as their fans call them) scenes or be it the Virika's (Viren and Jeevika) bedroom and bathroom romance in precise which made them fall for them or the khatti - meethi nokh - jhok between Virat and Maanvi. And yes, how can one forget the Duppatta scene between Viren and Jeevika? The show has showcased it all. Not one person who have seen EHMMBH can say 'I do not miss watching the show.' This enticing and extremely romanticized drama filled with a splash of Virat and Maanvi's Tu Tu Main Main made the viewers gripped the show so much so that they could not resist but watch till it ended and even now on YouTube.
This much loved popular drama celebrate its third anniversary yesterday and on this very special day for the entire cast and crew of the show, TellyBuzz tried getting in touch with the artists.
Much excited Krystle who essayed the role of Jeevika when asked, said, "I am extremely attached to the show even today. It has been over a year that the show ended but still when someone says Jeevika I turn around with a 32 teeth smile! I never played Jeevika , it was just a part of me. So I cannot miss it because the 'Jeevika part' of me will always remain in me. However, I do miss being a part of Ek Hazaron and my studio and my makeup room and my entire cast! We were a big fat family!

I love it how when lunch break was just about to happen every day , the director would free me up 5 mins earlier so I would run to Anjujiâ€™s room and set up lunch , all of us would sit together and eat !
When the cast was not there, Karan and I used to watch fun shows on my iPad and eat lunch together. So, I miss lunch time and those memories will remain with me forever. I have literally grown up in EHMMBH and learned so much as an actor and moreover as a human being!"
Krystle also took to twitter and shared her happiness of being a part of this show. "3 yrs ago TODAY 'ek hazaron' happened , 'JEEVIKA' happened...miss #ehmmbh a lot !!! Thank u all for all the Love!"
Nia too went on to twitter and shared her feelings. "@krystledsouza I thought of writing a similar quote.. And. saw urs..lol.. â€˜EHMMBH memoriesâ€™ #nostalgic..#Manvi"
We tried getting in touch with Nia Sharma, Kushal Tandon and Karan Tacker, but the three remained unavailable.
TellyBuzz wishes all of them all the good luck for their future endeavors.
Upasana Patel

6 years ago watched EHMMBH only for Karan Tacker... miss him as Viren
love VirIka &lt;3

+ 2
6 years ago loved this show especially Nia & kushal tandon as VirMan & their offscreen masti too.

+ 3
6 years ago Loved this show!! miss it aloott especially my Virika&lt;33

6 years ago u just rock nia sharma...proud to be ur fan doll

6 years ago Nia sharma love u , u r awesome girl in the tv industry