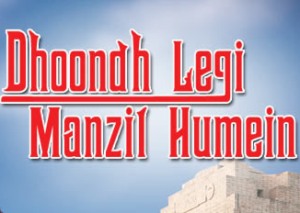 The cast of Star One's Dhoondh Legi Manzil Humein for the first time felt the brunt of shooting continuously for long hours...

The recent episodes which focused on Nandini's (Deepali Pansare) birthday party where all the four leads of the show were involved in a dance sequence, actually took a lot of time to shoot.

An insider told us that the shoot lasted for almost 26 hours, and went on from 10:00 Am to 2 PM the next afternoon."

"The birthday party sequence took time as the scene had to be shot in the dark; in day time, the close shots of all the actors were taken. The actual shoot happened in night and went on for almost 16 hours",elaborates our source.

Guess this is the price that every person in the entertainment industry has to pay!!

10 years ago i really like this show...specially love-story of abhishek and nandini...i want to see more romance between of them..

10 years ago Good show,watching star one after 4 years ,just to see this show.

+ 2
10 years ago wen will star one realise its mistake...hope before its too late...at present all the shows on this channels r really gud...but this 6 day telecasts is taking a toll on the actors and makers...and the effect we can see specially in the scripts

+ 3
10 years ago awhh i feeel saad for them! they hardly get any rest! as much as i wanna see the show, the actors need rest!

10 years ago lol!!!! if they had to shoot at night then dey cld have given the actors off daytime n told them 2 report in the evening. waise don't mind but after cng their dance it hardly required night...

by god! 26 hrs...the channel shld be sued..it exceeded beyond 20 hrs. lets sue this channel in fact lets sue all the channels.

+ 7
10 years ago This was bound to happen with 6 days a week schedule. We already got articles on YIH, PKYEK and Geet. Now, we have DLMH, also. I'm expecting an article on RBO any minute!