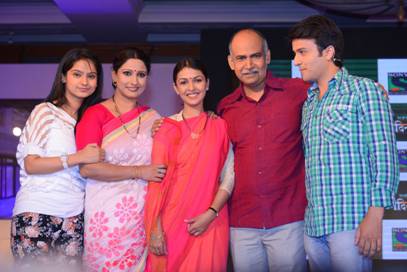 The popular show Desh Ki Beti Nandini on Sony Entertainment Television has touched million hearts worldwide in no time. We have got you some off screen gossip; it is known that the cast of Desh Ki Beti Nandini spends some relaxed moments with each other in their shoot breaks.

The on screen family members of Nandini aka Keerrti Nagpure's house plays Dhumsharas in their spare time.

Talking about the fun moments Kirti says, "We shoot the entire day and night. When we get free time we all play Dhumsharas on the sets. My on screen dad (Ashok Pandey) and me are in one team and in opposite team consist of my on screen mother (Aanchal Pandey), elder brother Siddharth and younger sister Ritu. I feel like being at home and not on sets when I spend my time with them says Keerti Nagpure.

Well its rights said that family who works together eats together plays together...

AnkitaKaran 6 years ago Love u keerti..

divya.d 6 years ago keerti you Rockk.. As Nandini...waiting for your political avtar in the show..

norzar 6 years ago Thanks for the nice article

Silambu 6 years ago I didn't realize Siddarth was the Nandini's elder brother!
Yeah having spend 3/4 of the day in the sets, its only natural that cast will bond with each other. Keerti, hope to see you soon as a firm dynamite political leader as Nandini.

divya.d 6 years ago its nice to know that keerti enjoying with her co-actors... Keerti is sweet girl... Work become enjoyeble when we have feelgood autmousfear around ... Keerti you doing great job as Nandini ..keep up the nice work...

-X-NeeNee-X- 9 years ago happy birthday! hope this year brings u much more success!

jnawaz 9 years ago the man is awesome!! i love him...he looks so handsome! for a guy..he is really aging gracefully!!

Deepika Padukone Arrives at NCB, to be Questioned over ...
46 minutes ago