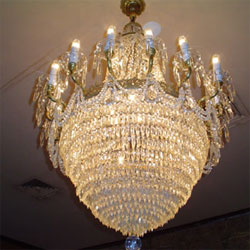 Recently on the sets of Zee's Saat Phere, there was a ruckus created while shooting a scene which required a huge chandelier. This chandelier was supposed to be broken in a shot. So the production house went out of its way to arrange a chandelier.

The production guys slogged it out and finally succeeded in getting a huge chandelier. When the chandelier came everyone was surprised to see its size.

"It was a beautiful, huge sized chandelier", says Deep, the creative head of Saat Phere.

The sad part was that the beautiful chandelier which was bought with utmost care had to be demolished as per the script requirement. It took a lot of efforts to hang the chandelier on the ceiling before the beautiful piece of art was broken into pieces. But the hard work paid off for the unit as the shot captured into the lens turned out to be beautiful.

The channel was really happy and impressed with the production house after seeing the whole chandelier's shot. Nivedita Bhattacharya who plays 'Jiji' in the show was also a part of the scene.

When asked about the precautionary steps taken she says, "Obviously it was a big shot and the chandelier was a huge one. The unit had to take precautionary measures so that no one gets hurt and we did take the necessary steps to avoid any mishaps".

One being asked about the beauty of the chandelier Saloni aka Rajshree Thakur, the lead of the show said, "the chandelier was a beauty and mind blowing huge sized creation by mankind. It was sad to know that it had to be broken. It was certainly one of its kind."

"I am happy the shot turned out to be a beautiful one. We all enjoyed the shot on the expense of the poor chandelier", jokes Rajshree.

Akshay Kumar’s Laxmmi Bomb Sold to Hotstar for a Record-Breaking ...

SuperGrl126301 11 years ago so basically they stole the chandelier angle from Phantom of the Opera....why can''t people be original...

thanks for posting though..

realitybites 11 years ago Thanks for the news. The scene really didnt require to break such a beautiful chandelier! They cld have done without it. Defi waste of money.

Gur.N.cool 11 years ago quite some news!

i like saat phere, hope it''s a good scene and that jiji get''s caught soon!!!

*Sohana*Singh* 11 years ago i cannot believe there is an article on a chandelier breking, i mean that is so dumb... and that too for saat phere. the show has to end!

realityshows!! 11 years ago Its of course waste of money , chandelier was beautiful but for a short there wasn''t a need of such huge marvelous chandelier . Anyway it doesn''t have much TRPs . I think the show must be bidden soon from the channel. i wish there was some show instead of this that was a game show as v public don`t wont any reality shows and its quite a lot of time we had one

ana2008 11 years ago what a waste of money.they should have tried something with the computer

Ramesh Taurani Spoke To Sushant a Day Before He Passed Away; ...
22 minutes ago