It has been destined that Anupriya Kapoor be part of Ekta Kapoor's family. What if things went wrong when she was chosen as the lead of Bayttaab Dil Kee Tamanna Hain, the girl has now been offered a second chance of working with Balaji Telefilms in one of Ekta's biggest projects to come, Tere Liye on Star Plus. 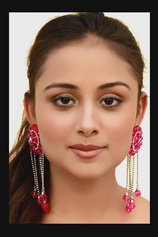 According to our source, "The production house had lots of options for the lead role. But none of them materialized, and hence the shoot was also delayed. Sreejita De was one of the actors who came close to signing the contract to play Thani, but that too did not happen for certain reasons. And it is Anupriya who was last seen in Star One's Miley Jab Hum Tum who has been finalized. She has given her final look test, and is all set to start shoot".

When contacted, Doris Dey, Creative Head confirmed that Anupriya is the lead in the show.

Anupriya Kapoor too told us, "Yes, I am playing the lead role in Tere Liye. I have not started shoot yet, and am eagerly looking forward to it".

Probe her more on her supposed first innings with Balaji thro' Bayttaab, and she says, "Bayttaab is a closed chapter for me. Miley Jab Hum Tum gave me a foundation, and I have got a good role in Tere Liye".

Anupriya Kapoor and Harshad Chopra play the leads, Thani and Anurag who love each other from their childhood days.

The shoot for Tere Liye is scheduled to begin soon..

zohakhan7 9 years ago missing u harshu and apk,u both rocked as onu and taani in tl

riiddzzyy 9 years ago Love u as Taani...
Love u loads APK
u rock,
God Bless

Rayankaif 9 years ago Miss u APK..Luv U lotsss Luv ur acting ,ur expressions every act of U is Mind-blowing ..Plz come back quickly in a new show as soon as possible ...U r simply out of the world.

mints05 9 years ago she was the most suitable to play tani...she rocked!!

mishti_17 9 years ago You are the best... Only you could have played Taani, thanks for giving us Taani

SheVi4life 10 years ago all the best harshad and Anupriya..i hope u guys rock!!!