Recently Telly Buzz broke the news about the appearance of actress Karisma Kapoor and singer turned actor Himesh Reshammiya as celebrity guests for the grand finale of the reality show on Star Plus Aajaa Mahi Vay. 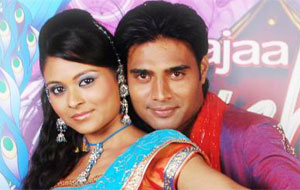 Featured Video
According to our sources, the three finalists Aslam Qureshi-Mayuree Chaddha, Pravin Ingale-Kiran Sutwane and Tahira Bhasin-Jashan Pratap Singh Kohli gave some stupendous and outstanding performances. But as they say, at the end of every show, there is only one winner. And after weeks of toiling, the couple that not only won the hearts of the judges, but their dream wedding too is Pravin Ingale and Kiran Sutwane.  Along with that the couple also won the prize money of 15 lakhs.

So don't miss all the excitement and catch the Grand Finale of Aaja Mahi Vay on Sunday 12th October at 8 pm only on Star Plus.

realityshows!! 14 years ago They were a bakvaas couple in terms of dancing and I wanted aslam and mayuri to win .
Any way congrats.

14 years ago Congrats to Pravin and Kiran!!

14 years ago thanx!
congratz 2 them!
wish them all the best 4 their future!

14 years ago whaaaaaaaaaaaat?! no way! OMG! What the ****
this is not possiable...i hated them...i wanted aslam and mayuaree to win ....they deserve it...
really ppl dont have choice :@