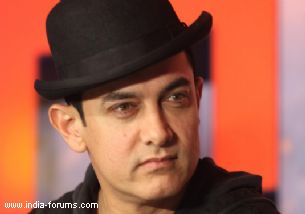 Bollywood star Aamir Khan, who is the great grand nephew of Muslim scholar and nationalist Maulana Abul Kalam Azad, Wednesday said it's his dream to make a film on the life of the great leader.

"I hope that someday I can use my capabilities, and through the art form that I practice, to make a film on Maulana Azad. It's a dream to bring his life to a larger populace of India," he said at the inauguration of Apeejay Kolkata Literary Fest 2014.

The actor wished he had met the freedom fighter and read excerpts from one of Azad's interviews in 1946.

In reference to the interview, he said he was "amazed" by Azad's predictions, a year before India's Independence, of the partition of the sub-continent in 1947 and the 1971 Bangladesh Liberation War.

AKLF, running till Jan 13, will celebrate the secular views of Azad to coincide with his 125th birth anniversary.

exclusive
Exclusive Jaan Kumar Sanu on keeping up with Bigg Boss 13, looking up ...
40 seconds ago

Subuhii Joshii loses weight all by herself
7 minutes ago

Deepika Padukone Arrives at NCB, to be Questioned over ...
56 minutes ago