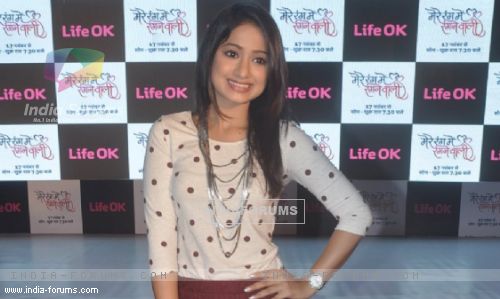 Pretty and petite actress Pranali Ghogare who made her debut with Rajshri Productions shares her excitement to bag a show with her first audition, characterization of her role and working with the famous Rajshri faces in this candid chat with TellyBuzz. Read on!

How is it making a debut with a production house like Rajshri Productions?

It is very overwhelming because it is my first show. This is the first audition that I gave for Rajshri and I bagged the Rajshri role. Being a part of Rajshri Productions is just like a dream come true. It is every actors' dream to be a Rajshri heroine. It was just unbelievable and it feels great to be a part of a production house like this.
What was that thing that made you to opt for this role?

Firstly, you cannot say a 'NO' to a Rajshri lead and in particular, this is a very different character than other Rajshri shows. All the Rajshri heroines are very soft spoken, calm and a girl next door. But here, the role of Radha that I am essaying is very adamant, confident, energetic and she knows what she wants. She wants to become an actress in life with her values. She will not get into any bad things or comprises to get into acting. She respects and loves her family so much that if you mess with them, they are at fault and Radha won't leave them.
How is it working with Rajshri faces like Alok Nath, Mahesh Thakur, Renuka Shahane?

It is just unbelievable for a newbie to get a chance to work with such seasoned actors like them. They are extremely supportive and so nice. They just don't make us feel different. In fact, when I met Renuka ji for the first time, she was so warm and you could just make that out from her smile. Moreover, both of us being Maharashtrians, we shared an impeccable rapport with each other. Alok Nath sir is at a different level altogether. It is just like a dream come true for me.
Any incident that happened with you and would like to share with us...

There are many hilarious incident that took place while shooting. But if I have to pick one then while we were shooting at Mathura, there was a scene that we were shooting where a bull is running behind me and I am running all around and have to go and hug LD (Samridh Bawa) because he is the only person I know in Mathura. They had given me a white and red costume and all the people out there were like Isne toh laal pehen ke rakha hai. Ab kya hoga iska? But my creatives and all were like Pranali don't worry, they are trained bulls. If you tell them to run, they will run and if they tell them to stop, they will stop. Sir asks me to stand near the bull because they wanted a two shot but not knowing the fact that the bull was getting mad seeing the Mathura crowd behind the camera. Every time sir turns behind and I am two meters ahead (laughs) and I did this for a couple of times. He is like, "I made you stand here, how come you came so forward?" and I was like "Sir, the bull stepped back." Eventually he stood there and made me stand near the bull and the way I ran as if some tiger is running behind me. While I came in full force towards LD, I hit his chest so hard that he still complains about that to me.
TellyBuzz wishes Pranali Ghogare all the luck for her future ventures!
Upasana Patel

6 years ago Mere Rang Mein Rangnewali is going quite good. Samridh and Pranali are really good considering the fact that they are newbies :D

May all your wishes be blessed and come true. Amen.

+ 2
9 years ago Happy Birthday Salman Khan! U toatally rock and u are one actor with a beautiful, golden heart!
Luv u ! Herez wishing you lots of happiness and success for the coming years of your life! &lt;3

9 years ago HAPPY BIRTHDAY SALMAN KHAN!!!
May god bless you
Love you