The relentless tasks of eating all the creeping and crawling creatures and putting up with the tantrums thrown by co-contestants have finally paid dividends to Mona Wasu, who has been titled the 'Jungle Queen' in Sony's Iss Jungle Se Mujhe Bachao. 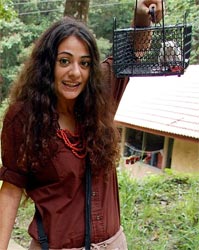 Featured Video
According to our source, "It comes as no surprise as Mona has always been a tough task master when it came to negotiating the tasks given to her with full zeal. Of course, she had the backup of junta, and today she has emerged as the 'Queen' of the jungle".

The Grand Finale of the show which will be aired tonight at 9 PM on Sony will see the three finalists Chetan, Mona and Anaida performing their final task in the jungles of Malaysia.

"However, this task was carried out to just mark an end to the adventurous journey. The results of the task were not taken into consideration, as the winner was decided purely on junta votes. The finalists were given a Jungle Spa task as their final encounter with the creepy creatures", informs our source.

While Mona was declared the winner with maximum votes, Chetan was the first runner-up followed by Anaida who took the third place.

A source tells us, "The entire team and crew along with the finalists will have a good wrap-up party tonight after which they will be heading back to India. Chetan's wife Lavinia and son, Mona's brother and Anaida's brother were present during the Grand Finale".

The Grand Finale of Iss Jungle will be aired on Sony at 9 PM tonight..

+ 3
12 years ago wowow Finalllyy.. i soo wanted her to wonn.. CONGRATS

12 years ago mona is also my fav but i want chetan to win....i'll miss iss jungle se mujhe bachao

12 years ago i'm so happy for her. she totally deserves it! congratz Mona =)

12 years ago i am so happy for mona..congratz...she deserve..yeah jungle queen...

12 years ago she was the most deserving congrats mona