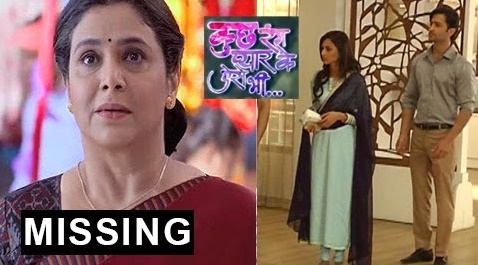 Sony TV's Kuch Rang Pyar Ke Aise Bhi is getting more dramatic with each passing day.
Dev hiding the fact that Sonakshi is not pregnant is apparently a very big deal for Sonakshi. Ishwari has extremely high hopes from her daughter-in-law and Sonakshi's pregnancy is the primary reason why her equation changed with Sonakshi, for better.
Sonakshi is heartbroken and thinks that she will confess that she is not pregnant to Ishwari. However, considering the current circumstances, her emotions will take over and she won't be able to do it.
In the episodes ahead, Radha will somehow get her hands on the reports and will show it to Ishwari. Since Radha and Ishwari won't be able to understand the terminologies, the two will head to Dev's room where they will be shellshocked to overhear Dev talking about the pregnancy reports being negative!
Ouchh!!!
Ishwari will misunderstand that along with Dev, even Sonakshi is involved in the BIG lie and will cry her heart out.
The next morning, Dev and Sonakshi wake up to the usual chores but will be unable to search for their mother, Ishwari. Radha will then reveal that Ishwari overheard them talking about the pregnancy reports being negative, leaving the lpair dumbfounded and perplexed at the same. The possibilities of where she could have gone and what is she up to keep hovering in their minds.
Ishwari will then return with a misunderstanding on her shoulders and will once again go back to being a 'typical' mother-in-law. This time, probably Dev too will have to bear the brunt of her anger!
This is by far the best 'nail biting' track in the show! Isn't it?
39 Likes

Supriya Pilgaonkar and Alka Mogha are amazing in their roles

Supriya Pilgaonkar and Alka Mogha are amazing in their roles

Becca 3 years ago KRPKAB is a benchmark for future Indian tv serials. Shaheer,Erica and Supriya are par excellent.

Saath Nibhana Saathiya 2 to go on air from THIS date?
23 minutes ago