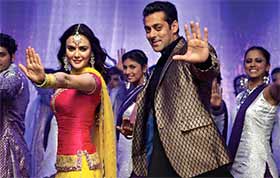 Inspired by the romantic classic "Before Sunrise", "Ishkq in Paris" is being touted as actress Preity Zinta's comeback film, after she took a break from silver screen to focus on her IPL cricket team.

The music, set in the scenery of Paris, has been composed by musical duo Sajid-Wajid and they have got ample support from six lyricists for the soundtrack. The album has a total of six songs for the listeners.

First up on the playlist is "It's all about tonight", a modern track with a mix of French, English and Hindi lyrics. The peppy number is full of techno sounds and has been crooned by the Sunidhi Chauhan, who dominates it all along. She has been supported well by Sophie Choudry and Rahul Vaidya in the vocal department, who deserve their share of praise in making the track a sure shot hit on the dance floor.

Changing the mood is "Saiyyan", a touching track with beautiful lyrics by Prasoon Joshi and sung in the soulful voice of Rahat Fateh Ali Khan. The song manages to give you a classical feel with the inclusion of tabla and harmonium. However, it is the violin that gets the gloominess across and has been put to use amazingly well by the composers.

Still it would not be your favorite Rahat number because after a point it fails to move you. 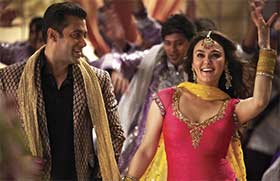 "Jaane bhi de" brightens up the mood and it is a sheer pleasure to hear the melodious voices of Sonu Nigam and Sunidhi Chauhan on the same platform. The piano and guitar are a delight and with minimal experimentation in the composition, the composers help retain the romantic flavour of the lyrics.

The duet is just sublime and delivered to perfection. There is also a solo version of the song by Wajid which is equally good. Although it's hard to choose between the two, one tends to vote in favour of the former, purely because of the beautiful blend of two melodious voices.

Next up is "Teri Choodiyan da crazy crazy sound", penned by Jalees Sherwani and crooned by Wajid,though it is a disappointment. What a disastrous transition the vocalist goes through and despite the dhol beats and Punjabi tadka, it fails to impress. The track is definitely a passe.

Rounding up the album is "Kudiye de kurti" which has Bollywood superstar Salman Khan shaking a leg with the pretty Preity. The song is high on energy and brings out the Punjabi flavour well with rhythmic dhol beats and harmonium. Sonu Nigam and Shreya Ghoshal have upped the love quotient with their energetic voices and set you in a groovy mood.

All in all, the soundtrack of "Ishkq in Paris" is a commendable effort that strives hard to reflect the varying moods of love and definitely manages to achieve it.