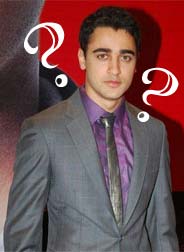 After the immense success of 'Ghajini', Aamir Khan is now preparing for his next production, 'Delhi Belly'. Recent buzz stated that Mr. Perfectionist's nephew, Imran Khan will essay the male lead role. However, the rest of the cast has still not been decided yet. Even the male lead refuses to release any information. Furthermore, the Jaane Tu Ya Jaane Na debutant was asked if Lisa Ray was suppose to play the female lead but the actor stated a flat no and added that he would say no more.

Looks like as much as Imran is trying to hide the cast, Shenaz Tresurywala may have let some bits outs. Shenaz recent stated that her next project is a fantastic production and that her co-star is someone who all girls die for today.

Well recent buzz states that Shenaz's fantastic production is none other than Aamir Khan's 'Dehli Belly' and her all-girls-die-for co-star is Imran Khan.