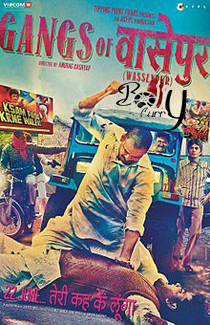 and the recently released Don 2? All these films were huge BO successes and threw light on the same gritty subject - Gangsters.

Now, the next to join the brigade is Anurag Kashyap's Gangs of Wasseypur and Ram Gopal Varma's Department. While Anurag's film is based on the coal mafia of Dhanbad, Ramu's film starring Amitabh Bacchan, Sanjay Dutt and Rana Daggubati, deals with the struggle for power between a cop and a gangster.

With huge success rates and audiences loving every bit of the action drama between a cop and a gangster, it is indeed becoming a latest trend to produce films that show the bad guys as leads! Soon to be seen are Shootout at Wadala, Once Upon A Time In Mumbai 2 and Zilla Gaziabad witha total of about 170 crore rupees riding on these films!
Originally, gangster films were made with a major city like Mumbai as their premise but with Gangs of Wasseypur, filmmakers have crossed the barrier and are traveling across India to a much smaller locales. With this film, Anurag, who made his mark in the industry with the hit gang film Satya, is taking another big step forward. Known to be a methodical director, he has shot the film in the rustic locations of Bihar and Jharkhand. The film will be offered in 2 parts of 40 mins each, spanning across three generations and six decades.
As for Ram Gopal Varma, he returns to his forte of action films with Department.

Among the other upcoming gangster films, Zilla Ghaziabad, is about the the life of Mahendar Fauzi, who was quite a terror in Ghaziabad. The ensemble cast includes the rarely seen Vivek Oberoi and Sanju baba.
Each gangster film promises a rush of adrenaline and on the edge action sequences! BollyCurry hopes that these films click at the BO!