View Profile
Tell your about your role is bhavra?

Bhavara is a very modern fiction of little ancient characters, for e.g. we have 4 characters from the past the righteousness of “Ram and Sita” and passionate love of “Heir and Ranja”. We have a combination of these 4 characters in the film, in way modern with modern set up along with love, friendship, ambitions and everything.  The character I am playing is “Aman”, who is a righteous guy and it could be equated to “Modern Day Ram”. 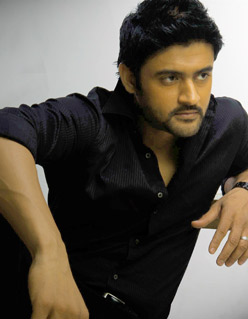 It’s your first movie so how do you feel about it?

How did you get the role?

I was not particularly trying for the films, but I got a call from Darmesh Darshan production saying, he wanted to meet me. It was a little difficult to believe in the beginning, because very often we play pranks, looking at the call from the skeptical point view, but still I went and met him. When I met him for the first time, we sat and spoke Darmesh Ji had never seen my work and when I offered he didn’t want to see. He said “because if I see my character in you I do not want to be guided by another work of yours, you’ll be my creation and I would try to recreate you”! But after the meeting for 3-four months, I heard nothing from them after 4 months they gave me a call and said let’s meet again and narrow down things.

On working with Darmesh Darshan you feel?

“Empowered”... I feel I am learning so much and now I have to appreciate the fact that to do your first film with a person who is almost a school in himself. The passion the person has towards his work, he is an encyclopedia, the references he has from the industry itself for a guy like me who doesn’t have a filmy background, I think it’s very very remote possibility that something like this can happen and very fortunate too. It’s a great experience, it’s almost empowering and reinventing is a rebirth.

How was it working with Eijaz, Shveta and Sangeeta Ghosh?

Great! Fortunately we all are from the same TV background but surprisingly or mystically we have never worked with each other, we never shared the screen, except for once may be with Shveta but we had not worked extensively with each other. Though we all knew of each other but the permutation was so mystic,( not that they designed it that way) but surprisingly if you see Darmeshji didn’t think of this, but the four of us happens to be dancers on TV, all the four of us never happens to have worked with each other and here we are together, rebuilding a comradely because we have not worked with each other. We were introduced to each other and then we went “hi I m this” but we knew each other predicament because we shared the same; I could understand where Sangeeta, Shveta and Eijaz are coming from. Even on the set it was easier as we knew about the pattern of working, as in the culture of working was same for all of us. It was like “Meeting an Indian in London”... London is every much Indian now, but “ek zamane mei” when people didn’t know each other and you meet an Indian in a foreign you feel so connected to that person, immaterial of he being a surd or a south Indian. There was a warm companionship between the four of us and we do care of each other. 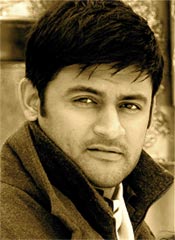 What can the audience expect from the film?

I don’t want to promise anything great but my personal conviction stands that the film has turned out to be good. It’s a commercial film, technically very sound and it is a full on masala film, which people are going to enjoy and it’s not a 3 hour or 2 hour 30 minutes film, it’s a short film. It’s a compacted and pg3 kind film with romantic thriller lesser than 2 hour 15 minutes, so it’s a very powerful and I am getting a good vibe about the film.

What does the crystal ball show in the near future for Manav Gohil?  What kind of roles is lined up in the future?

None as of now, I am going through scripts but honestly I have not signed anything nor things really exciting has come about, I think it’s a little premature for me.

Thank you for liking me on tv and I promise I will do my best for you to like me on silver screen. And also I am making my blog which be soon completed, I guess within a week’s time.