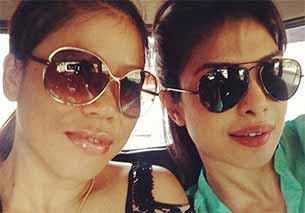 National Award-winning actress Priyanka Chopra, who is yet to devote 15 days to complete shooting of the biopic on India's champion boxer M.C. Mary Kom, says every scene in the film is inspirational.

"'Mary Kom' is the story of every woman who wants to be larger than she is meant to be. Inspiring to do every scene...can't believe only 15 days left to complete the film. It's been so tumultuous yet wonderful," Priyanka posted on her Twitter page.

The actress is currently busy shooting for the film, based on Olympic medal-winner and world champion Mary Kom's life. Directed by Omung Kumar, the movie is slated to release on Gandhi Jayanti Oct 2.

Priyanka has gone out of her way to be physically fit for the role, and she has spent long time with the sports icon herself to get right the nuances of the character.