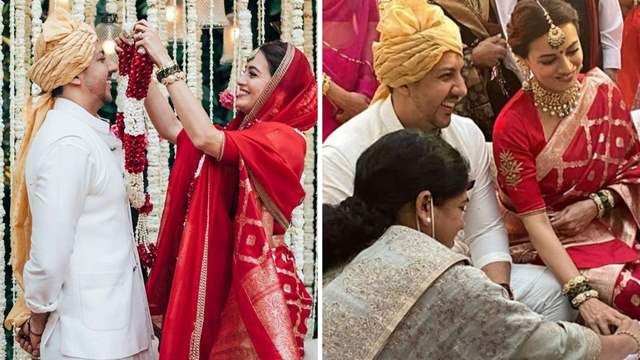 Bollywood actress Dia Mirza found love in Mumbai based businessman, Vaibhav Rekhi. The couple got married in an intimate ceremony on February 15, 2021.

The duo opted for a lowkey ceremony and got hitched in presence of family and friends. As per reports, only 50 guests were invited including B town celebs like Aditi Rao Hydari, Jacky Bhagnani to name a few.

Dia and Vaibhav had a resigter marriage at the actress’ residence in Mumbai. Later, they exchanged garlands as they officially became husband and wife.

Check out a video and some unseen pictures from the varmala ceremony:

Post the ceremony, the couple had greeted the paparazzi outside the venue and even posed together. The newly weds also distributed sweets to the shutterbugs. While Dia looked ethereal in a stunning red banarsi saree, Vaibhav complimented her in a white sherwani.

Check out some more pictures;